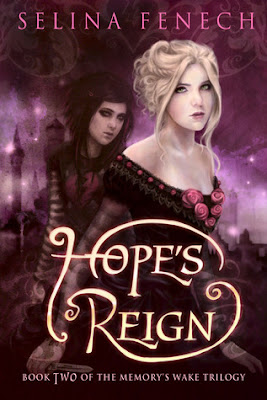 Everything is slipping away from Memory. The bond of friendship between her, Eloryn, Roen, and Will, that was formed while running for their lives is tearing. In a world that doesn’t feel like home, with a mind filled with nothing but questions, Memory struggles to be true to herself… whoever that is. When her past self starts haunting her, she knows her sanity could be the next thing she will lose.

Hope’s Reign is the whimsical and adventure filled second instalment in Selina Fenech’s Memory’s Wake Trilogy and is a fantastic follow up to the first novel, further developing the storyline and delighting once more.

After the events of the first book, Memory found herself hoping that life in Avall would be a breeze, but that doesn’t seem to be the case. Despite everything they went through, the bond between Memory, Eloryn, Roen and Will seems to be falling apart and with Eloryn and Memory expected to take on their roles as heirs to the throne, Memory sets out to learn about her kingdom. Yet as Eloryn struggles with the duties expected of her it seems like Memory’s past is haunting her and with those closest to Memory not necessarily able to be trusted, soon Memory finds herself needing to discover who she can rely on before it's too late.

Having enjoyed Memory’s Wake immensely, I jumped straight into Hope’s Reign as soon as I finished its predecessor and was thoroughly entranced yet again. Picking up not long after the last novel left off, Memory and Lory are trying to assimilate to their new roles as Princesses and are beginning to get to know each other now they know they are sisters, allowing us as readers to discover the next step in their journey.

Selina Fenech continues to beautifully detail the story with Hope’s Reign told through the same various POV’s the last book was. Memory’s Eloryn’s, Roens and Will’s voices allow for another well rounded tale. Whimsical and lyrical, Hope’s Reign is a luscious fantasy tale full of character development, action and romance.

I really love all the characters and enjoy seeing them all interact. I love this fantasy world of magic and fae and royalty that author Selina Fenech has created and enjoy following Memory, Lory and Roen throughout the story. They’re such a great friends and have a wonderful closeness. And of course the romance between Eloryn and Roen doesn’t hurt and constantly has me eagerly reading along, ready to see them get together.

Sweet at times, exciting and highly entertaining, Hope’s Reign was a lovely sequel and another great instalment in this beautiful fantasy series. Can’t wait to see how Selina Fenech plans to end the series after the game changer of an ending that features in Hope’s Reign!