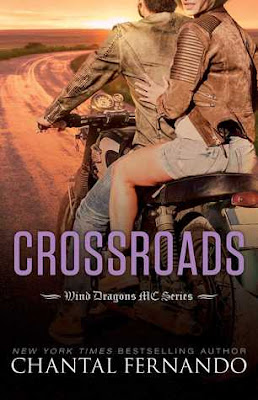 Ranger is at a crossroads: he has a chance to leave the motorcycle club and do something else with his life—but he keeps getting dragged back. When the Wind Dragons Motorcycle Club asks for his help, Ranger agrees, not only because it is hard to say no to them, but also because he has a vested interest.

A woman is missing.

And Ranger knows her.

The Wind Dragons aren’t the only ones hoping this girl can be found—on the hunt is Johanna Chase, a stubborn detective who won’t give up until the missing woman is found safe. She needs Ranger to navigate the underground world of motorcycle clubs, and immediately, sparks fly. Ranger fights the attraction. He has no plans on going there, no matter how beautiful and badass she is. A biker and a cop? Ridiculous.

But the two of them soon realize that they’re in way over their heads, and now they have to trust each other in order to save her. With the WDMC and the police force at their back, it should be no problem, right?

Crossroads is the 6th and latest instalment in Chantal Fernando’s devilishly delicious Wind Dragon’s MC series and is yet another enjoyable read full of sensuality and romance.

Ranger is one of the newest members of the Wind Dragon’s Motorcycle Club, having joined with his best friend Talon from a rival MC and is still trying to find his place in his new brotherhood. Extremely intelligent, Ranger has always felt out of place, even though the Wind Dragons and their women have welcomed him with open arms. So when the former club president’s old lady Faye asks him for a favour with a case she’s working on, his first response is no, but when Ranger discovers the missing woman is someone from his past, finding her suddenly becomes his only sole focus. Even if it means working with the missing woman’s cop cousin. Johanna Chase is determined to find her missing cousin, even if the local authorities have given up. As a police officer she’s willing to use every resource at her disposable, as well as work with a biker if necessary. Ranger and Johanna may be on opposite sides of the law but when sparks fly will the two of them risk it all for a shot at love?

Chantal Fernando never fails to entertain me with her novels and Crossroads is no expectation. Just plain good reading, the Wind Dragon’s MC’s latest release is another well told, well-paced tale that unfolds through both heroine and hero’s POV’s and takes readers on another sexually charged and sensual journey!

Following new Wind Dragon’s member Ranger, Crossroads takes readers away from the clubhouse and on an investigation as Ranger and Jo work closely to find Jo’s cousin who has been kidnapped. Personally I liked this investigative aspect of the story and seeing Ranger and Jo work together to track down Elizabeth and those who have taken her. Fernando balances her romance and the seriousness of the situation well, but at the end of the day, Ranger and Jo can’t fight the attraction they feel.

There’s obviously a forbidden aura to Ranger and Jo’s relationship with her being a cop and him being a biker, but there’s also another threat to their relationship with Ranger’s history and his friendship with Jo’s cousin coming into play. I understand why this was brought into the story and can see the impact it had on the plotline, but I don’t think it was necessary at times either, especially seeing as it became obvious quite quickly where things were heading.

Overall I really liked both Ranger and Jo as characters and as a couple. I liked that Ranger was an intelligent man while also being a sexy biker and that Jo embraced being a cop but didn’t seem to let it affect her femininity or vulnerability as a woman where Ranger was concerned. Crossroads features some sexy love scenes and seeing as Ranger and Jo are attracted to each other from the get go, jump straight into the attraction and chemistry between them.

Entertaining and ending very sweetly, I know Chantal Fernando plans this as the end of the series but I’ll never turn down a Wind Dragon’s MC tale in the future as I love meeting and revisiting the fantastic characters that inhabit this world!