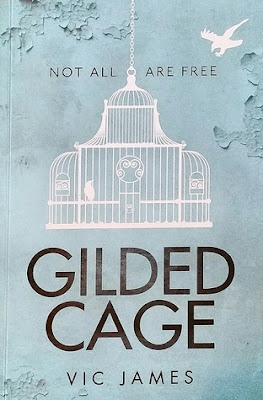 Our world belongs to the Equals — aristocrats with magical gifts — and all commoners must serve them for ten years. But behind the gates of England's grandest estate lies a power that could break the world.

A girl thirsts for love and knowledge.

Abi is a servant to England's most powerful family, but her spirit is free. So when she falls for one of the noble-born sons, Abi faces a terrible choice. Uncovering the family's secrets might win her liberty, but will her heart pay the price?

A boy dreams of revolution.

Abi's brother, Luke, is enslaved in a brutal factory town. Far from his family and cruelly oppressed, he makes friends whose ideals could cost him everything. Now Luke has discovered there may be a power even greater than magic: revolution.

And an aristocrat will remake the world with his dark gifts.

He is a shadow in the glittering world of the Equals, with mysterious powers no one else understands. But will he liberate—or destroy?

Gilded Cage is Vic James debut novel and is a unique and enigmatic tale, introducing readers to a darkly magical world of aristocrats and those that serve them.

In an alternate Great Britain, not everyone is born free. While those lucky enough to be born with powerfully abilities known as Skill live high and mighty lives, those born without Skill must pay for the sins of their ancestors by participating in a mandatory ten years of slavery in service to the Skillful. The Hadley family have just agreed to serve their ten years at the same time, believing they’ll be placed together, but when their teenage son Luke is sent to a different slavetown than the Kyneston Estate the rest of the family are sent to, the family are left separated. One of the most influential families in existence, the Jardine’s are known for their cruelty and indifference towards their slaves. With the Jardine sons known for their different levels of abilities and influence it would be a dangerous thing for the Hadley’s to get more involved with the family than just slave-to-master relationship they’re supposed to have. Rebellion and romance is in the air, yet with intentions not to be trusted and power the ultimate prize, will Hadley siblings Luke and his sister Abi pay the ultimate price in this dangerous world?

Gilded Cage turned out to be a bit of a mixed bucket for me. To begin with the premise sounded absolutely spectacular but unfortunately I found the execution to be somewhat lacking. While I don’t necessary believe Gilded Cage was a badly written or bad story, it just didn’t appeal to me as I had hoped it would heading into the story; especially considering how anticipated a novel it was of 2017. Gilded Cage seemed to have it all; intricate world, mystery, magic and even a hint of forbidden romance, but it just seemed to be missing that special thing to take it to the next level. That being said, there was something about the book that kept me reading, and the final few chapters certainly had me entranced!

Branded as Downtown Abbey-esque with magical aspects (I’m not a fan of Downtown Abbey by the way) Gilded Cage introduces readers to a world where Skilled aristocrats hold themselves in high regard compared to the rest of the community and those without abilities are seen as less than human. The world Vic James has created does hold a lot of promise coming across as a mix of turn of the century/early 1900’s attitudes and values and an almost dystopian like society.

Unfolding through various POV’s including siblings Luke and Abi, Gilded Cage spends a lot of time bouncing back and forth between Luke’s life at Millmoor and Abi’s experiences at Kyneston. Throwing in a few chapters here and there from other individuals, Skilled heirs and “bad guys” Gilded Cage offers a well rounded experience. One of my issues with the story though is that I failed to truly connect with the characters at times. I wanted that little extra something to really suck me in, and I wanted to care about the characters and their lives and it wasn’t until towards the end of the novel I began to feel that way.

For me personally, the best part of the story came at the end when quite a few developments occurred and there were revelations that changed or shaped the story immensely. These final few chapters had me eagerly turning pages and keen for more. Ending superbly and on a cliffhanger, I do find myself interested to see what happens with Vic James’s world next. I think the series has the potential to grow and will definitely tune in next instalment to see where James takes the story!

Source: Sent for review by publisher (Thank you guys!)
Publisher: Pan Macmillan Australia
Format: Paperback ARC
Australian RRP: $16.99
Release Date: February 1st 2017
Purchase: Bookworld | Booktopia | The Book Depository | Amazon
Final Thoughts: Gilded Cage was a slow going read, but picked up towards the end. I will definitely look out for the sequel to see what happens next.