Book Shelf: A Bite at the Cherry (Blackburn Academy #1) by Rita Stradling 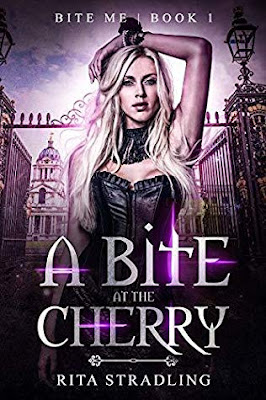 Three things about Justin Roberts:
1. He’s a bully.
2. Our relationship is toxic.
3. He’s the only one who knows my secret.

A year ago, I woke in the morgue with a note in my hand telling me that I’m a vampire. I need blood or I’ll start killing people. Lucky for me, Justin has been sneaking into my bedroom and feeding me blood for a year, and the only price I have to pay for it is putting up with his cruel snipes and my unwanted feelings for him.

I just can’t figure out why he keeps coming back.

But all that changes when I’m offered a full-ride scholarship to Justin’s mysterious school, the elite Blackburn Academy, where I might finally learn about vampires. About myself. All I have to do is pass the grueling entrance trials, and the scholarship will be mine. Problem is, Justin doesn’t want me anywhere near his elite school and rich friends. He’s vowed to sabotage me.

Justin may have been feeding me blood for a year, but he doesn’t know who he’s up against.

But, Blackburn Academy is more than it seems. I’ll be facing more than what Justin Roberts alone can dish out.

Will competing in the trials be the new beginning I’m hoping for, or will it end my undead existence?

A Bite at the Cherry is Rita Stradling’s latest release and is a thrilling and enjoying vampiric tale woven with mystery and sizzling romantic tension.

A year ago, seventeen year old January Moore’s life changed forever when she woke in a morgue with a note telling her she was now a vampire. Following the instructions in the note, January found her way to Justin Roberts, a fellow teenager who agrees to supply her with blood in exchange for two things; she doesn’t ask questions and they tell no one of their weekly encounters. Now January’s grandmother has just taken a cleaning job on Justin’s side of town and January finds herself in close proximity to the boy she both loathes and can’t get enough of. Offered a scholarship to Justin’s mysterious high school, the elite Blackburn Academy, January soon begins to realise that Justin has his own secrets and they may just be the biggest threat January has experienced in her undead life yet….

I have to say I was quite impressed by A Bite at the Cherry. Though it is a “vampire” novel at it’s base, the elements of mystery and secrecy Rita Stradling weaves around January’s story gives the novel a thrilling and intriguing vibe. I won’t give too much away as part of the story's appeal is that you don’t exactly know what all the secrets are until the final few chapters, but readers will find themselves keen to discover the truth as January navigates her new life living on the Roberts estate.

As our protagonist, I quite liked January. Being a vampire is only a really small part of who she is as a character. As someone with an alcoholic mother, January has not lived a very easy life; she’s done it tough, but she never comes across as someone who feels sorry for herself or who wines about her position. January tends to make the most of things and I enjoyed this spunk about her. She wants a better life for herself and those she loves and she’s more than willing to work hard for it.

Readers will find themselves keen to piece the clues together as Rita Stradling details A Bite at the Cherry. It may come across that January blindly accepts certain circumstances too easily—namely that she’s a vampire---without further investigating too much, but this tends to bring more mystery to the story. It’s easy to get lost in January’s turbulent but sizzling relationship with Justin that is charged with desire on both ends as well as her blossoming friendships with other Blackburn Academy scholarship recipients. Teen drama and supernatural threats weave together effortlessly.

As the final few chapters of A Bite at the Cherry offer some long awaited answers, they also offer more than a few new questions and possibilities. Rita Stradling pulls a rabbit out of the hat with some revelations I wasn’t anticipating and leaves me raring to delve into the heart of Blackburn Academy and the Hawthorn Group alongside January. Bring on the next novel!