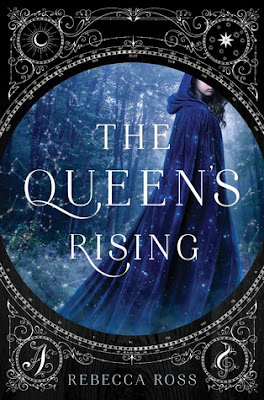 When her seventeenth summer solstice arrives, Brienna desires only two things: to master her passion and to be chosen by a patron.

Growing up in the southern Kingdom of Valenia at the renowned Magnalia House should have prepared her for such a life. While some are born with an innate talent for one of the five passions—art, music, dramatics, wit, and knowledge—Brienna struggled to find hers until she belatedly chose to study knowledge. However, despite all her preparations, Brienna’s greatest fear comes true—the solstice does not go according to plan and she is left without a patron.

Months later, her life takes an unexpected turn when a disgraced lord offers her patronage. Suspicious of his intent, and with no other choices, she accepts. But there is much more to his story, and Brienna soon discovers that he has sought her out for his own vengeful gain. For there is a dangerous plot being planned to overthrow the king of Maevana—the archrival kingdom of Valenia—and restore the rightful queen, and her magic, to the northern throne. And others are involved—some closer to Brienna than she realizes.

With war brewing between the two lands, Brienna must choose whose side she will remain loyal to—passion or blood. Because a queen is destined to rise and lead the battle to reclaim the crown. The ultimate decision Brienna must determine is: Who will be that queen?

The Queen’s Rising is Rebecca’s Ross’s debut novel and is an enchanting story of elegance, slow burning romance, beautiful familial bonds and a rebellion that will change a very kingdom forever.

Having grown up in the southern Kingdom of Valenia, seventeen year old orphan Brienna dwells at the renowned Magnalia House where young ladies study one of the five passions; art, music, dramatics, wit and knowledge. Though many display inert talents for one of these subjects, Brienna struggled for years to find hers before eventually settling on knowledge. As the summer solstice approaches where trainees will be claimed by a patron of their passion, Brienna fears that she will be deemed inadequate and passed over; a fear that later comes true much to Brienna’s horror. Remaining at Magnalia House, Brienna’s future takes a surprising turn when she begins to experience visions of another time, seemingly set in the neighbouring land of Maevana. Soon offered patronage by a disgraced lord, Brienna soon finds herself caught up in an intricate plot to overthrow the King of Maevana and restore the rightful Queen to the throne. As the plot thickens, Brienna quickly discovers that she herself is tied to this land of warrior queens and quarrelling territories in a way she never expected. Tasked with restoring a queen, Brienna must decide where her loyalty lies and ultimately what is stronger; passion or blood because her choice has the power to change the very course of a war……

I absolutely adored this novel; simply adored it! So much more than I was anticipating if I’m being perfectly honest. The story Rebecca Ross has woven together was elegantly told, perfectly paced and burning with romance and unexpected bonds of family. Set in a refined and aristocratic fantasy world reminiscent of France in the 16th century, The Queen’s Rising follows a strong willed and highly likable heroine who develops and grows immensely over the course of the novel.

There was so much about The Queen’s Rising I enjoyed; from the beautiful writing, vivid setting and likable heroine to the bonds of family and friendship that developed to the soft but passionate undertone of romance that complimented the story. Though some parts were slower than others, I loved the way Rebecca Ross built the story; I felt like Brienna’s transformation and growth was believable as it occurred over a number of months.

I also found it very refreshing that for once, the main protagonist was not destined to be queen. She was not the one who would be tasked with ruling a land and overseeing her people. Rather our heroine Brienna was someone whose actions would help bring this individual to power—I liked that; very much. I also enjoyed reading about the land of Maevana where people value daughters above sons. It’s often quite the opposite in societies, both real and fictional, so I felt it empowering that this wasn’t the case in The Queen’s Rising.

Wonderfully completed, The Queen’s Rising races towards a powerful and important battle between two opposing sides. There are a number of surprises and developments throughout the book you may, or may not, see coming as well as a perfect ending to this chapter of the series. I’m already excited to see what Rebecca Ross has plans in the sequel for Brienna, I for one cannot wait until it’s in my hot little hands and I can enjoy the beauty of this world once more!

Source: Sent for review by publisher via Netgalley (Thank you guys!)
Publisher: Harper Collins
Format: Kindle ebook via Netgalley (I also own a hardback copy)
Release Date: February 6th 2018
Buy: Angus & Robertson | Booktopia | The Book Depository | Amazon
Final Thoughts: I highly enjoyed this novel and cannot wait until I can read the next one!