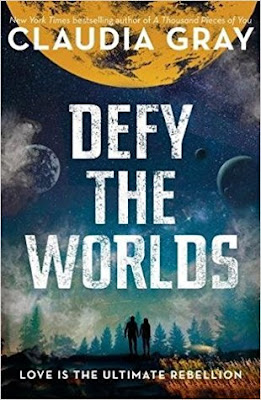 A stunning blend of action-packed science fiction and love against the odds. Perfect for fans of STAR WARS and the DIVERGENT series.

Noemi Vidal has returned to her planet, Genesis, as an outsider - ostracised for refusing to end the Liberty War by sacrificing Abel, the most advanced mechanical man ever made. She dreams of travelling through the stars again, and when a deadly plague arrives on Genesis, Noemi gets her chance. The only soldier to have ever left her planet, it will be up to her to save its people. If only she wasn't flying right into a trap.

Abel, now fully aware of his soul and captaining his own Vagabond ship, never dreamed he'd see Noemi again, not when the entire universe stands between them. But when his creator Burton Mansfield delivers news of Noemi's entrapment, Abel knows he must save her, even if it means risking his own life.

Danger lurks in the dark corners of the galaxy, and Abel and Noemi will discover a secret that could save Genesis and Earth... or destroy them all.

In this thrilling and romantic sequel to Defy the Stars, bestselling author Claudia Gray asks us all to consider what drives us, and where we truly belong.

Defy the World’s is the second novel in Claudia Gray’s intergalactic Constellation series and is another fast paced, adrenaline packed and romantic novel that will sweep you away into a science fiction world of discovery and love against all cost.

Solider Noemi Vidal has returned to her home planet of Genesis as an outsider, ostracised for her actions in the Liberty War that included refusing to sacrifice the life of Abel who had become a trusted friend and someone Noemi cared about. Now Noemi finds herself lightyears away from Abel and unlikely to ever see him again; struggling to re-assimilate on her planet. Across the galaxy, Abel is captaining his own ship for the first time and learning to balance his mech nature with his newly found soul. When Earth launches a new bio attack on Genesis, Noemi must venture to find assistance, with each step bringing her closer to Abel once again. Time is running out to save the citizens of Genesis but with Mansfield still trying to locate Abel anything they do could have disastrous results. Will Noemi and Abel find each other again? Or will they both be lost before they have the chance?

After the cliffhanger that was the ending of Defy the Stars, Claudia Gray is back with another edge-of-your-seat exhilarating instalment with Defy the World! A wonderful sequel that picks up approximately six months after its processor left off, Defy the World sees readers once again follow Noemi and Abel is this dually told novel that sees them face their next fight—both against their latest enemies and in their fight back to get back to one another.

Personally I really like the world Gray has created. It has all the elements of a great sci-fi I love and blends all the action, romance and character chemistry I would want in this kind of YA novel. Both Noemi and Abel are solid leads who propel the story forward and share a fantastic dynamic. Much of their relationship was established in the first novel as they got to know each other on board the Persephone but it was adorable to see them reunited in this sequel and begin to explore the romance and connection between them.

Even though he is a mech, Abel is so very sweet and human in nature so seeing he and Noemi connect was adorable to witness and something I highly enjoyed. His way of thinking makes for some highly entertaining reading and I just love how loyal Noemi is to her planet and her own idea of morality.

Racing towards a powerful and unexpected ending that once again leaves readers hankering for the next novel, Defy the Worlds is a sensational sequel and leaves me dying to see what Claudia Gray has up her sleave next!