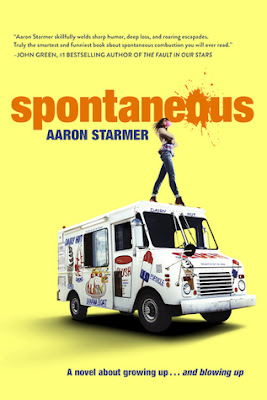 Katelyn is the first, but she won’t be the last teenager to blow up without warning or explanation. As the seniors continue to pop like balloons and the national eye turns to Mara’s suburban New Jersey hometown, the FBI rolls in and the search for a reason is on.

Whip-smart and blunt, Mara narrates the end of their world as she knows it while trying to make it to graduation in one piece. It's an explosive year punctuated by romance, quarantine, lifelong friendship, hallucinogenic mushrooms, bloggers, ice cream trucks, “Snooze Button™,” Bon Jovi, and the filthiest language you’ve ever heard from the President of the United States.

Aaron Starmer rewrites the rulebook with Spontaneous. But beneath the outrageous is a ridiculously funny, super honest, and truly moving exemplar of the absurd and raw truths of being a teenager in the 21st century . . . and the heartache of saying goodbye.

Spontaneous by Aaron Starmer is a deeply original coming of age tale that is quirky, unique and strangely funny while managing to highlight the perils that come with growing up.

Seventeen year old Mara Carlyle’s whole world changes the day one of her classmates quite literally blows up during third period. Boom. Gone. Sayonara Katelyn Ogden. Katelyn may be the first to explode but she’s definitely not the last, as the rest of the remaining senior class start spontaneously combusting with no warning and no explanation. As the rest of the world responds, people flock to Mara’s small New Jersey town to witness the phenomenon that is plaguing the teenagers. Scientists, FBI agents and experts can’t explain why these everyday teenagers are suddenly exploding, and with the death toll rising, Mara knows that any day now could mean the end for herself and those she loves.

There’s no doubt in my mind that Spontaneous is a unique novel. I mean, come on---teenagers exploding at random for no noticeable reason? Teamed with some sharp writing, that’s as unique as you can get….and then Aaron Starmer throws Mara Carlyle into the works who is sarcastic, silly and just stumbling along as teenagers do. She drinks, she does drugs, has sex and just basically lives her life with no promises and no regrets.

Mara was one of those characters I didn’t know if I loved or hated. There’s moments where she’s selfish and unthinking, but you know what? She a teenager. She’s growing and learning and making mistakes. As those around Mara explode, her life changes and Spontaneous sees her try to live her everyday life while a black cloud hangs over her head. No one can explain why teenagers are dying the way they are and no one can offer a solution. It’s intriguing to see Mara potter along, falling in love and hanging with her best friend Tess as teens explode all around her.

This novel is really true to its name, in a lot of different ways. I never knew what would happen next. Who would live, who would die and whose life was about to end. Aaron Starmer doesn’t shy away from introducing you to a character just to have them die down the track….quite the opposite. Almost everyone you meet (the senior class that is) is one moment away from being gone, and I actually felt quite emotional at times. The losses were hard-hitting and sad, and did hit me at times.

My only negative about this book was the ending. I felt like we were building to something—all these spontaneous combustions and deaths; I wanted answers and I don’t feel like Starmer ever really gave us any. Perhaps that was his intention, but after reading a novel like this, I would have liked a bit more closure.

Even though it’s often silly at times, Spontaneous did make me think; about life and the mark we leave on this world. Sharp and biting, Spontaneous is definitely going to appeal to those readers after something quirky and different.