Book Shelf: All Her Secrets by Kate Avery Ellison 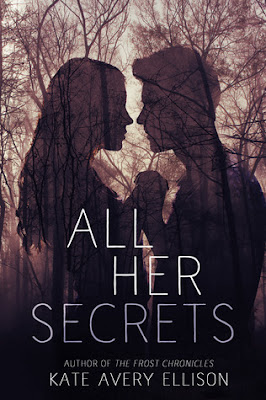 Nothing is as it seems in this psychological YA thriller set in a not-too-distant future.

A GIRL WITH SECRETS

Eighteen-year-old Victoria, the daughter of inventor and visionary-genius Bill Faraday, was almost murdered by a stranger four years ago. She's been trying to forget the incident ever since.

When Victoria discovers something that might explain why she was brutally attacked, she heads home from college to uncover the truth. Then, she’s kidnapped.

A GUY FROM THE WRONG SIDE OF THE TRACKS

Sam’s just a poor kid from Valley City, but he knows who Victoria is as soon as his cousin Craig drags her from the trees. He doesn’t want anything to do with what appears to be a revenge kidnapping, but Craig has a gun and needs someone to take the fall if things go wrong.

A DESPERATE PLAN TO SURVIVE

Craig and his buddies imprison Sam and Victoria in an abandoned mountain cabin to await ransom. Putting aside mistrust for tentative friendship, Victoria and Sam conspire to escape together, and the close quarters ignite a startling attraction between them. Then they discover strange tunnels beneath the cabin. And what they find inside the tunnels proves more bizarre.

With a plan in place to escape, freedom seems within reach. But Sam and Victoria are both keeping secrets about their past.

And secrets can be deadly.

All Her Secrets is a standalone tale from author Kate Avery Ellison and is a mysterious tale of survival set in an alternate futuristic world that keeps you guessing until the very end.

Set in the not too distant future, All Her Secrets introduces readers to eighteen year old Victoria whose father is the world famous genius and inventor Bill Faraday known for his robotic inventions that now litter the world all around us. Victoria is a survivor, having survived an attempted murder four years before, but nothing could have prepared her to find herself kidnapped from her home and taken out into the wilderness by a group of individuals who plan to ransom her to her rich and powerful father. Sam’s just a hard working young man who grew up in a ruined city and is just hoping to put his younger sister through school and pay for is ailing grandmas stay in a medical facility. He never planned to get drawn into his cousin Craig’s kidnapping of Victoria or find himself a victim too when Craig turns on him. Imprisoned together in a deserted cabin, Victoria and Sam will have to work together if they have any hope of escaping, but with both teens keeping secrets, will their secrets be their downfall?

Having deeply enjoyed Kate Avery Ellison’s Secrets of Itlantis series, I was excited to dive straight into her latest release All Her Secrets and was very happy with the story I found. Perfect for fans of Black Ice by Becca Fitzpatrick, All Her Secrets is a well told tale of survival that mixes romance with mystery, secrets and the unexpected.

Unfolding through short, sharp chapters that bounce back and forth between Victoria and Sam’s POV, All Her Secrets introduces readers to a slightly futuristic world where robots have taken the majority of jobs from everyday people and are a fixture in everyday life, although they are vehemently opposed by certain groups of people. Personally I enjoyed that the world within All Her Secrets is very close to our current would but was tinged with advancements. If I was being picky I think I would have liked to get to know Ellison’s world a little bit more, but at the same time I appreciated that she focused around Victoria and Sam’s fight for survival more and that survival in the elements aura that surrounded the story.

I thought Victoria and Sam were personable characters, especially Sam who won me over with his kind-hearted desire to do the best for his family. Discovering that he works to put his sister through school and keep his unwell grandmother in the care made me love him even more. He really was just in a bad situation and fighting to do the best he could.

Imprisoned in a cabin in the woods, Victoria and Sam do bond very quickly as they realise they’ll need to rely on one another if they have any hope to escape. At first they’re both not sure if they should trust the other or if they should fake a sense of camaraderie to get what they want, but there is an honest connection there between them and I liked seeing Kate Avery Ellison build their relationship up as they shared details about themselves with each other to pass the time.

There’s this burning sense of desperation to Victoria and Sam’s plight as they fight to survive and escape. Readers will never expect the twist at the end when Ellison reveals the motivations and true natures of some characters. Unexpected and surprising, the ending was sufficient enough to wrap up the tale, but still left me with questions.

Overall All Her Secrets is an engaging tale of survival and the power of secrets that is well worth a read if you love survivalist tales with a twist or are after something guaranteed to keep you wondering until the final page.