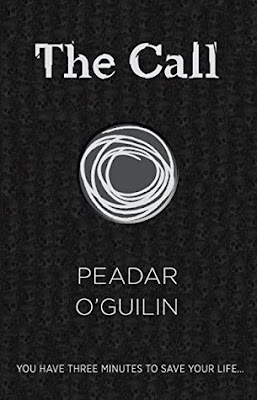 3 minutes and 4 seconds. The length of time every teenager is 'Called', from the moment they vanish to the moment they reappear. 9 out of 10 children return dead. Even the survivors are changed. The nation must survive.

Nessa, Megan and Anto are at a training school - to give them some chance to fight back. Their enemy is brutal and unforgiving. But Nessa is determined to come back alive. Determined to prove that her polio-twisted legs won't get her killed. But her enemies don't just live in the Grey Land. There are people closer to home who will go to any length to see her, and the nation, fail....

Peadar Ó Guilín’s latest release The Call is a compelling and at times gruesome tale that mixes Irish folklore and mythology into a fast paced and dangerous dystopian style read perfect for fans of The Hunger Games and Divergent!

Ireland is a nation cut off from the rest of the world after a war against the Sidhe (also known as faeries) saw the Irish banish the Sidhe into the dark and colourless Grey Land. In retribution, the Sidhe now Call every Irish child at some point during their adolescence to last three minutes in the Grey Land where they are hunted down and slaughtered by the Sidhe. Few return alive and those that do are fractured shadows of themselves, often deformed and twisted. Having learnt the truth about the future that awaits her at ten years of age, Vanessa "Nessa" Dohtery has spent the last four years of her life, training, preparing and anticipating the moment when she will be Called. Affected by polio as a child, Nessa knows her chances of surviving the Call are slim, but that doesn’t mean she’s going to give up without a fight…..

I was actually really impressed with The Call and found it to be a truly engaging read. Peadar Ó Guilín's storytelling is really impressive—his writing is lyrical and descriptive as he paints an often dangerous scene with lives lost and deaths aplenty. Reminiscent of The Hunger Games as Ireland’s teens spend three minutes fighting for their lives, where in the Grey Land three human minutes can be realistically days or weeks, The Call is very exciting and riveting at times.

The Call is told in third person and predominately follows main character Nessa, although Ó Guilín often tells chapters through the eyes of other characters within the story, normally Nessa’s fellow students and victims of the Call. Witnessing the last moments of individuals as they fight for their lives is heart breaking and gruelling with Peadar Ó Guilín depicting various fight scenes that end bloody and painful.

If I correctly kept with the timeline of The Call, Nessa and her fellow students are supposed to be around fourteen years of age during the story, but really do read as older. Whether this is unintentional on the author’s part or a result of their growing up faster due to what awaits them in life, I couldn't help but picture the characters as older as I read the story.

Despite the often fast paced scenes within the story, The Call is a sombre book at times as Ó Guilín depicts a world where loss of life is an everyday occurrence that really can’t be helped. There’s some unexpected twists towards the end that see certain characters betray their people for the sake of themselves and a big battle occurs between the teachers and students of Nessa’s collage and the Sidhe.

For all that happens within this story, don’t expect an ending where the baddies are completely defeated and our characters living happily ever after….because you won’t find it within The Call. And you know what? I actually preferred to see Peadar Ó Guilín conclude the story the way he did. Sometimes there’s no fixable solution to problems; sure there’s a way to make them better for a time, but in the end all you can really do is continue on the best you can.

A great standalone tale, The Call is a thrilling read that takes you on one hell of a dark and dangerous journey. I wouldn’t mind venturing into Peadar Ó Guilín’s vivid world again down the track if the chance ever arose but right now I’m pretty satisfied with how the novel concluded. An enjoyable and vivid read well worth reading!