Book Shelf: Hold Me Like a Breath (Once Upon a Crime Family #1) by Tiffany Schmidt 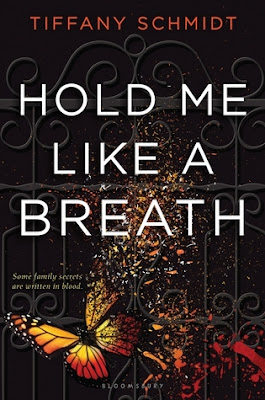 Penelope Landlow has grown up with the knowledge that almost anything can be bought or sold—including body parts. She’s the daughter of one of the three crime families that control the black market for organ transplants.

Penelope’s surrounded by all the suffocating privilege and protection her family can provide, but they can't protect her from the autoimmune disorder that causes her to bruise so easily.

And in her family's line of work no one can be safe forever.

All Penelope has ever wanted is freedom and independence. But when she’s caught in the crossfire as rival families scramble for prominence, she learns that her wishes come with casualties, that betrayal hurts worse than bruises, that love is a risk worth taking . . . and maybe she’s not as fragile as everyone thinks.

Hold Me Like a Breath by Tiffany Schmidt is the first novel in her Once Upon A Crime Family series is a well written and original contemporary read that introduces readers to an alluring and intriguing world of crime, betrayal and mystery woven together with romance, sweetness and friendship.

Seventeen year old Penelope Landlow is a member of one the most prominent and successful crime families responsible for black market organ transplants. Suffering from an autoimmune disorder that causes her to bruise and bleed easily, Penny has spent her life behind the iron bars of her family’s estate, protected and watched over. Multiple blood infusions and treatments haven’t dulled Penny’s desire for freedom and to be treated normal, but Penny could never have expected her chance at independence would come through tragedy. Caught between rival families keen to take power over the organ industry, Penny will discover that not everything is as it seems, no one can be trusted and betrayal is closer than she thought….

Having previously read and loved Tiffany Schmidt’s Bright Before Sunrise, I was super excited to read her latest release Hold Me Like a Breath and thoroughly enjoyed it. I was actually I bit surprised to discover after finishing the story how many negative reviews it garnered because I found a lot to like within its pages.

Introducing readers to a unique and tangible world, Hold Me Like a Breath was a steadily progressing tale that weaves an intriguing story. Tiffany Schmidt is a beautiful writer. Her prose it effortless, but lyrical and I loved the Mafia-esq world she created within Hold Me Like a Breath. There's a lot I want to discover about it.

The main character in Hold Me Like a Breath Penny was someone I actually liked. Penny suffers from a rare disease known as idiopathic thrombocytopenic purpura, a condition that sees its sufferers bruise and bleed easily as their bodies destroy their own Platelets. In a time where a lot of authors strive to write heroines that are seen as oddly vulnerable despite their obvious strengths, I have to commend Tiffany Schmidt for giving Penny a fragility that actually had a medical reason behind it. Despite coming from a powerful, wealthy and successful family, Penny’s frustration at being overly protected bleeds through the pages and her desire for independence evident with each word Schmidt wrote. I was very much behind her fight for freedom, even if it came of the wings of a loss and enjoyed seeing her survive on her own

Hold Me Like a Breath sees Penny grow amidst a loss. At first I was thrown by the fact there were two guys in Penelope’s life—one she had always had feelings for and a second she fell for. Personally I feel like the first guy—or at least his budding romance with Penny, was unnecessary, while the second guy in her life was all kinds of sweetness. Penny and Char have all the hallmarks of that perfect, sweet first love and I thought they were so adorable and endearing.

There were some revelations with characters I had kind of put together myself and others I just wasn’t expecting. Hold Me Like a Breath introduces three different crime families to readers and I’m hopeful of getting the opportunity to explore them more as the series progresses, especially seeing as the sequel Break Me Like a Promise is set to feature Magnolia Vickers--someone we met in Hold Me Like a Breath and a member of the Texas crime family.

Overall, I found Hold Me Like a Breath to be an engaging and unique read with a sweet romance. Looking forward to seeing what Tiffany Schmidt has in store in the next novel of the series!

Source: Sent for review by publisher (Thank you guys!)
Publisher: Bloomsbury Australia
Format: Paperback
Australian RRP: $12.99
Release Date: July 2016
Purchase: Bookworld | Booktopia | The Book Depository | Amazon
Final Thoughts: I really enjoyed this and can't wait to read the next book as soon as I can!