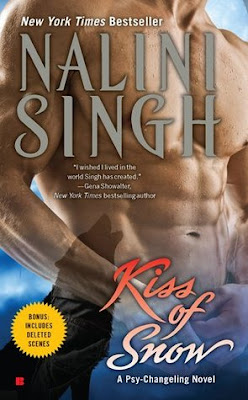 Since the moment of her defection from the PsyNet and into the SnowDancer wolf pack, Sienna Lauren has had one weakness. Hawke. Alpha and dangerous, he compels her to madness.

Hawke is used to walking alone, having lost the woman who would’ve been his mate long ago. But Sienna fascinates the primal heart of him, even as he tells himself she is far too young to handle the wild fury of the wolf.

Then Sienna changes the rules and suddenly, there is no more distance, only the most intimate of battles between two people who were never meant to meet. Yet as they strip away each other’s secrets in a storm of raw emotion, they must also ready themselves for a far more vicious fight…

A deadly enemy is out to destroy SnowDancer, striking at everything they hold dear, but it is Sienna’s darkest secret that may yet savage the pack that is her home…and the alpha who is its heartbeat…

Kiss of Snow is the highly anticipated tenth instalment in Nalini Singh’s luscious Psy-Changeling series and is the novel most fans were waiting for with SnowDancer alpha Hawke and X Psy Sienna finally giving into the passion and attraction that has been simmering and developing between them for year with explosive results!

SnowDancer Alpha Hawke lost the woman meant to be his mate as a child and ever since has embraced the solitude of his wolf, accepting that he was destined to be alone. That was until Psy Sienna Lauren and her family defected from the PsyNet and were embraced by Hawke’s pack. Biting and wise beyond her years, Sienna has been Hawke’s weakness since the moment he met her and having watched Sienna mature into a woman, it’s become harder and harder to fight the yearning desire he has for her. A Psy of immense power who was trained from a young age, the only thing Sienna has wanted since her defection is Hawke. Though she was too young at the time for an intimate relationship, Hawke has always fascinated her on a primal level and everything about him makes her want. Knowing Hawke’s past, Sienna understands his reluctance to be with her, but as war looms Sienna is no longer content to let age and the ghost of Hawke’s past stand between them and the passion that burns. Giving into the connection between them seems dangerous, but denying it appears to be no longer an option for either parties involved….

My goodness do I love this series! Truly. Beginning it with the fifteenth novel next to be released I’ve been gorging myself on this series; devouring book after book and becoming more in love with the series and characters with the turn of every page. Like most fans, Hawke and Sienna’s book has been the one I was most looking forward to and Singh certainly does not disappoint!

The relationship between Hawke and Sienna has been a delicious undertone to this series from book one. Though she was only sixteen at the time, Singh made it clear Sienna had the power to push Hawke and make him react like no other. We all waited with bated breath as their relationship developed over the years to see what would happen. And finally all our waiting has been rewarded!

Kiss of Snow is definitely one of, if not my favourite book in this series. I found that Nalini Singh explored the unique balance between Hawke and Sienna’s personalities well and addressed some issues that had been effecting their relationship. Unlike previous novels, Singh also follows the building relationship between healer Lara and Psy Walker in Kiss of Snow, the first time we have really focused on two romances in one book.

Sienna has come a long way since being the angry, bratty teenager she was when we first met her in Slave to Sensation. She’s blossomed into a very strong individual who loves her family and the pack who have become her own. Far from an unfeeling Psy, Sienna gives as good as she takes and despite her age and inexperience is actually a worthy match for Hawke.

As for Hawke, well, Hawke has always been a character I’ve loved and seeing things unfold through his eyes has only deepened my love for him. I adore the fierce way he loves and protects his pack and the close relationship he has with all his lieutenants, pack members and friends. Hawke is an alpha through and through and demands a lot of Sienna, even as he attempts to bring his simmering desire and his wolf under control. Having fought the attraction to the woman he wants for so long, seeing Hawke finally give in and court Sienna was really satisfying, especially seeing as how sweetly Nalini Singh wrote their romance.

I enjoyed the build-up and the exploration of Sienna’s sexual innocence in comparison to Hawke’s dominant and cocky wolf side in Kiss of Snow. Singh writes some fiery sex scenes but also depicts some really beautiful scenes between Hawke and Sienna too. I would certainly be game to dance with Hawke or play poker with him any time! These two are a fabulous couple who bring a lot of happiness to the other simply by being.

Kiss of Snow is a very sexually charged but action based read with the SnowDancer and DarkRiver packs facing off against members of the Psy Council towards the end of the novel. Dangerous, exciting and addictive, Kiss of Snow is another sensational Psy-Changeling novel that in no way disappoints—can’t wait to read more!