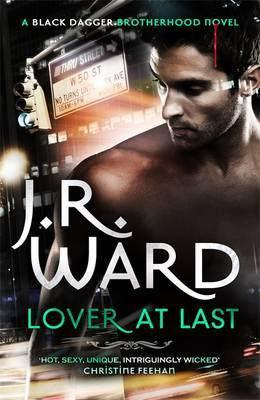 Qhuinn, son of no one, is used to being on his own. Disavowed from his bloodline, shunned by the aristocracy, he has finally found an identity as one of the most brutal fighters in the war against the Lessening Society. But his life is not complete. Even as the prospect of having a family of his own seems to be within reach, he is empty on the inside, his heart given to another....

Blay, after years of unrequited love, has moved on from his feelings for Qhuinn. And it’s about time: The male has found his perfect match in a Chosen female, and they are going to have a young- just as Qhuinn has always wanted for himself. It’s hard to see the new couple together, but building your life around a pipe dream is just a heartbreak waiting to happen. As he’s learned firsthand.

Fate seems to have taken these vampire soldiers in different directions... but as the battle over the race’s throne intensifies, and new players on the scene in Caldwell create mortal danger for the Brotherhood, Qhuinn finally learns the true definition of courage, and two hearts who are meant to be together... finally become one.

Lover At Last is the 11th installment in J.R. Ward's darkly seductive Black Dagger Brotherhood series and is the book fans have been waiting for! After a long and tedious journey, Qhuinn and Blay's story is finally told as they face their feelings for each other once and for all!

This book....wow! Simply incredible! Considering the expectations sitting on her shoulders in the build up to the highly anticipated story of Qhuinn and Blay, Ward has done an incredible job with Lover at Last. Lover at Last is well told and emotionally driven. It's dark and harsh and sexy and thrilling....basically everything I love about the BDB books!

I feel liked I've been waiting for this book forever. After so many shared, and tension filled moments, as well as more will-they or won't-they situations than I care to mention, Qhuinn and Blay finally get their HEA and I don't think Ward could have written it better! Admittedly, this is the first time I've ventured into anything man on man, but after falling in love with these two over the course of the series, I've wanted nothing more than to see them work their issues out and be together. And in Lover at Last, they finally do.

Lover at Last is a really hard book to read. Detailing the lives of not only Qhuinn and Blay, but Layla and Xcor as well as Shadow Brother Trez and new characters Assail and Sola, J.R. Ward takes her readers on a whirlwind of emotions. With Blay and Qhuinn's history and Layla pregnancy, stakes are high for these characters and as they're put through an emotional wringer, as the reader, it's impossible not to be caught up in their stories. Blay and Qhuinn's tale is the focal point of Lover at Last, but it also begins the build up of Layla and Xcors relationship as well as Assail and Solas and Trez and Selena's in the future---promising a difficult and hard journey for these pairs, Layla and Xcor in particular!

Qhuinn and Blay...oh do I love these boys! Qhuinn ranks amongst my favourite BDB characters, right up these with Zsadist and Vichous. He's such a deliciously haunted individual; so very tortured and broken by his past. Qhuinn is a strong male, but he's also very afraid when it comes to facing his feelings, especially where Blay is concerned, and it's this fear that has led to many of their problems in the past.

Blay too is a great character--noble and honourable and kind; he and Qhuinn just go so well together. Throughout Lover at Last there are a lot of issues for them to face, but that journey is written with perfect pacing and sequence. They've been a part of each others lives for such a long time and they have such a strong connection. M/M has never been my thing, but Ward writes their relationship with such an alluring animal magnetism. It's powerful and fierce; two almost completely alpha males together. I thought the dynamics of their relationship was great, but I also thought it was sweet to see the roles reversed at times. Plus, the softer, gentler moments shared between the two lovers was so incredibly endearing and so, so sweet.

There's a lot happening in the BDB world right now, and I'm really excited to see what J.R. Ward has in store for her characters next. Layla's pregnancy proves to be exciting, especially considering how involved Qhuinn is (he and Layla have such a great friendship!) but the prospect of a romance between her and Xcor in the future is what has me most excited. He may not exactly be "good" but I'm totally digging Xcor! The yearning he and Layla feel and the fact they want what they can't have [each other] is appealing to the side of me that loves all things forbidden!

Featuring J.R. Wards trademark raw humor and wit, Lover at Last is a dark, harsh and incredibly riveting story from one of the queens of PNR and will have you eagerly awaiting the release of the next book for the chance to be once more back in this raw, addictive world!

Source: I bought.
Format: Paperback
Buy it: Bookworld | The Nile | The Book Depository | Amazon
My Recommendation: PNR fans will love this book!
Cover: It's okay, but nothing brilliant.
Will I read sequel/continue with series: YES!