Book Shelf: Body & Soul (The Ghost and the Goth #3) by Stacey Kade 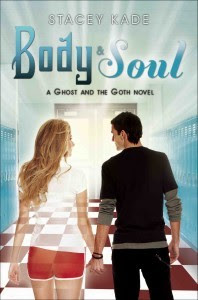 The Ghost
I’ve been trapped in the body of Lily “Ally” Turner for a month now. Talk about a fashion crisis on an epic scale. What worries me more, though, is sometimes I catch Will looking at me like he thinks I’m Lily...or that he wishes I were. Without the good looks of my former self, I don’t know who I am, or if who that is is good enough. I need out of this mess. Now.

Will and I have been looking for a solution, one that would separate me from Lily without killing her. But it’s not going well. Then, when it seems like things couldn’t get any worse, we run into Misty, my former best friend and boyfriend-stealer extraordinaire, who claims she’s being haunted...by me. Seriously?

The Goth
I’ll admit it. It’s really weird to look at Alona but see Lily. I do know the difference, though, contrary to what Alona might be saying. And Alona is more than a pretty face to me, not that she would believe that.

Our one lead for some help in this messed up situation might be a page torn from the yellow pages-—the “Psychics” section-—I found in my dad’s stuff. One of the “fakes” seems a bit more real-—and odd-—than the others. Before I can investigate further, though, Alona is off and chasing a ghost that’s probably nothing more than a figment of Misty’s guilty imagination. Now Lily’s family is freaking out because she didn’t come home, my mom is ordering me to stay out of it, and something is definitely wrong with the person formerly known as Lily “Ally” Turner....

Body and Soul marks the end of the Ghost and the Goth trilogy and it does not disappoint, going out with an exciting ending; exactly what fans were hoping for!

I thoroughly enjoyed this series! It’s so fun and engaging and the two main characters have such a fantastic dynamic together. Personally, I would have been thrilled to read book after book about Will and Alona’s adventures! Stacey Kade tells such fun stories about these two and the things they get up to and deal with never fail to entertain me; they put a smile on my face constantly and I’m truly sad to see the series end.

Body and Soul picks up not long after the killer ending of Queen of the Dead where ghost Alona finds herself still trapped in the body of Lily “Ally” Turner and living her life. I really liked this plotline and the way it moved along. While a lot of things weren’t outright surprising and were occasionally predictable, the writing and the story still had me hooked. I was addicted every time I picked up a Ghost and Goth novel and this one was no different. Will and Alona have both come such a long way, but they’re still the fantastic characters they’ve always been. The chemistry is still electric and while they’re both so different they’re closer than ever.

I seriously love Alona. And I was really worried I wouldn’t when I first began the series but boy was I wrong! I love this girl—love, love, love her! Alona is one of those characters you’ve can’t help but adore despite their occasionally selfish attitude and their flaws. One thing that was so wonderful was how much Alona grew and the person she became throughout the course of the series. She was always more than what people saw on the outside, but over the course of the three books Alona saw a whole new side of life as she got to know Will more and then found herself becoming “Ally”. Even when she made mistakes or made bad choices, she was always trying to be better and that’s so incredible admirable! Her smart mouth and sarcastic take on things blended so well with her occasionally snotty attitude that her relationship with Will and the way they interacted never failed to make me giddy. They were so cute.

And of course Will is just awesome—I want a Goth boy like him! Will Killian was a great male lead to read about. Stacey Kade wrote his voice so well that it was so incredible easily to slip into his head throughout the course of the duel told series. It was nice to see a male lead that wasn’t so all-star but rather what you’d expect from a typical teenager. Granted he was more than capable of holding his own against Alona verbally despite having his vulnerabilities when it came to ghosts and being a ghost-talker.

The relationship that developed between Alona and Will is one of my favorites! They’re such opposites and seeing them attracted to each other in the way they grow to be is the highlight of the series in my eyes. Naturally, before Alona’s death they’d never really spoken to one another, but with her death Alona has no choice to turn to Will and from then on an unexpected friendship and bond develops. One of the things that make these two such a great couple in my eyes are the sparks they set off. They have their quorums with one another and bicker often, but Stacey writes such a sweetly developing friendship and then romance that it just works. They come to rely on one another so deeply and trust each other more than anyone that it’s impossible not to feel the strength their relationship has and the power of it. It’s not an I-cannot-live-without-you relationship but rather I-really-don’t-want-to. Plus, it develops over time so it’s not too strong or unbelievable.

Blending together high school drama with friendship and the supernatural, Kade tells a fantastic story of love, friendship and the power of life after death with this series! Body and Soul brings about a perfect ending to a narrowly underrated series and leaves all of us fans exceptionally satisfied!

Source: I bought
Format: Hardback
Buy it: Bookworld | The Nile | The Book Depository | Amazon
My Recommendation: Read it! If you enjoy fun, sassy ghost tales then this is the series for you!
Cover: Love it! All the covers in this series have been awesome!
Will I read sequel/continue with series: This is the last book in this series, but I can't wait to read what Stacey Kade releases next!