Book Shelf: You Were Mine (Rosemary Beach #9) by Abbi Glines 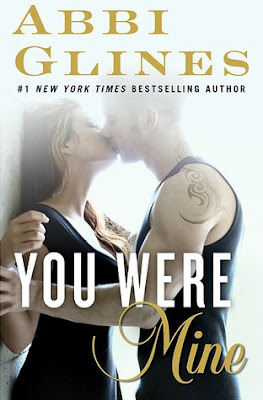 In the eyes of the wealthy playboys who frequent Kerrington Country Club in Rosemary Beach, Tripp Newark is a hero. Under pressure from his parents to become a lawyer and lead a conservative, upper-class life, Tripp disappeared from town five years ago to travel the world, forfeiting the opportunity to inherit millions. Yet few know what he was really running from...

Bethy Lowry was unraveling long before her boyfriend drowned in a riptide trying to save her after she'd had one too many drinks--again. A trailer park kid working as a cart girl among the wealthy patrons of Kerrington Country Club, Bethy has always been impressionable. But five years ago, before she earned her reputation as a hard-drinking, easy girl, she had spent a single summer with Tripp Newark that changed her life forever...

You Were Mine is the 9th installment in Abbi Glines sensational Rosemary Beach series and is the heartbreaking and emotional tale between Bethy and Tripp that readers have been waiting for. Sexy and sensual, but extremely emotional, You Were Mine will hold you from the beginning as you feel an endless amount of emotion.

As a die heard Abbi Glines fan, I pretty much devour anything she writes with You Were Mine no exception, but boy was this book hard to read! Told through the dual POV's of Bethy Lowry and Tripp Newark, You Were Mine sees Bethy and Tripp face their past in order to be together once more. I'll be honest here; I wasn't sure what to expect with this novel. Readers such as myself have always known Bethy as the fun loving best friend of Blaire who had her world shattered when her boyfriend Jace was killed saving her life. In You Were Mine, Bethy is still broken and trying to find her feet, but it's Tripp, Jace's cousin and Bethy's first love who sets out to protect and have her again.

When Tripp first came into the series, Abbi Glines made it abundantly clear that he and Bethy had a history. Until his return, Bethy appeared to be deliriously in love with Jace, but when Jace died, it soon became evident she had once shared something with his cousin that was still haunting her despite her recent loss.

You Were Mine takes course over a manner of months and is actually a very hard book to read emotionally at times. Bethy is dealing with so much guilt over Jace's death and her part in it, as well as the secrets she kept from him for so many years. Including the fact she was one desperately in love with his cousin. And really still is. I think the hardest part with this novel is reconciling Bethy's love for Jace with her soul deep love for Tripp that has never really left her. At it's base, You Were Mine is a story of redemption, finding love once more and moving on.

It's so hard seeing someone fall in love again after they've suffered a great loss and in this case Bethy has always been the one for Tripp, so you know how desperately he loves her despite their past and the fact that until recently she was with his cousin Jace, someone he also loved. Tripp and Bethy have so much history, something Glines explores and allows readers to see through a series of flashbacks. Tripp was Bethy's first. Her first love, her first lover and in You Were Mine she slowly manages to come back to herself with the help of Tripp and her wonderful set of friends.

It really was beautiful seeing Bethy find happiness again, even though she faced some tough moments and had to let go of her guilt. Abbi Glines manages to explore something deep and beautiful with Tripp and Bethy in You Were Mine and I loved how she gave their romance such a solid foundation and history. Moving on from Jace would have been one thing to witness, but seeing how Bethy did still love Tripp; how he was her "one big love" was a beautiful thing and certainly managed to bring out a whole tirade of emotions in me---something Abbi Glines is very good at!

Wonderfully written, painful but beautiful, You Were Mine is another sensational tale by Abbi Glines that will no doubt reach into very deep parts of you as she pens a whirlwind tale of love, forgiveness and the beauty of moving on. You Were Mine is riveting and oh, so emotional, and ends with that trademark hopeful ending Glines is so good at.

Source: Sent for review by Simon & Schuster (Thank you Jen!)
Format: Paperback
Buy it: Bookworld | The Nile | The Book Depository | Amazon
My Recommendation: Another book fans of this series must read.
Cover: It's actually quite sexy; I like it....
Will I read sequel/continue with series: Yes.