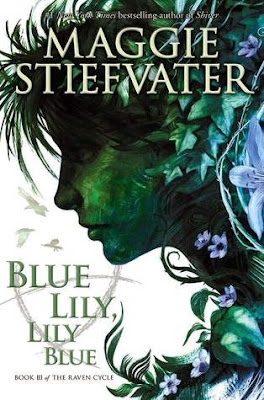 There is danger in dreaming. But there is even more danger in waking up.

The trick with found things though, is how easily they can be lost.

Friends can betray.
Mothers can disappear.
Visions can mislead.
Certainties can unravel.

Blue Lily, Lily Blue is the third installment in Maggie Stiefvater’s one of a kind Raven Boys series and takes readers once more on a startling adventure where you never know what will happen next!

As someone who has read all of Maggie Stiefvater’s work and who has followed her career ever since Lament: The Faerie Queen’s Deception’s release, I can’t say how much I enjoy this series and the uniqueness of it. There’s no doubt in my mind that there is nothing even remotely close to The Raven Boys out there and that it’s storyline is all its own. To even describe the novel is a tad difficult, because to break it down and define it would be to remove some of the magic and wonder surrounding this series.

Blue Lily, Lily Blue continues to follow Blue Sargent, and Aglionby students, Richard Gansey the third, also known as Gansey, Ronan Lynch and Adam Parrish—the Raven Boys, and sees them continue on their quest to find the lost Welsh King Glendower, believed to be sleeping and hidden somewhere close to the ley lines. With Blue’s mother still missing after her disappearance in the last book, Blue Lily, Lily Blue is told in third person and is told through the varying POV’s of Blue, the Raven Boys and other characters who are a part of the series.

As always Maggie Stievater’s writing is spot on, illuminating a very intriguing plotline. If I’m honest I never really know what she’ll do next and where she is going with this series, but there’s no doubt I’ve loved every moment of it so far. Stievater manages to weave together excellent character dynamics with the wonder and magic that drives this series. Exploring Welsh myth as no one has before, Maggie Stievater captivates as her main character Blue joins her friends and family to continue hunting for Glendower as outside forces start to make things harder.

The forbidden romance between Blue and Gansey continues to simmer with both characters yearning so deeply for the other, but knowing they cannot be together. For Blue to kiss her true love would be to kill him, and with Gansey’s destiny already known to her, Blue fears losing him, despite knowing the inevitability of it all. There’s so much desire between these two and whilst it’s a lovely inclusion to the series that doesn’t overpower the rest of the storyline, it’s still so very powerful.

Blue was never in love with Adam, but she cares for Gansey so deeply and can’t seem to stay away from him, even though they both know it would only end in pain. I think they could really fall in love with each other—in fact they’re probably already starting to fall—but Maggie Stiefvater continues to force them apart, much to the torment of her readers.

There’s twists, pain and lots of adventure with Blue Lily, Lily Blue and in true Stiefvater style, Maggie Stiefvater leaves her readers wondering just what will happen next and eagerly anticipating the release of the next novel that is sure to ensnare once more!

Source: Sent for review by Scholastic Australia (Thank you Sarah!)
Format: Hardback
Buy it: Bookworld | The Nile | The Book Depository | Amazon
My Recommendation: This is an incredibly unique series and absolutely worth reading!
Cover: Perfect alongside the others so far :)
Will I read sequel/continue with series: Yes!