Book Shelf: By Sun and Saltwater (Secrets of Itlantis #2) by Kate Avery Ellison 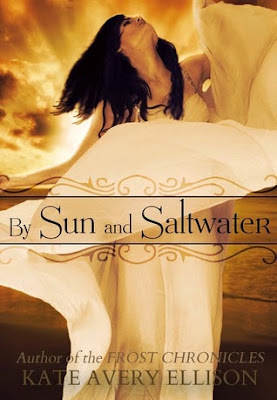 Aemi has a new life beneath the sea in the world of Itlantis, but all is hardly idyllic—her assimilation into Itlantean society is fraught with accusations and rumors, those closest to her are keeping deadly secrets, and most frightening of all, someone is trying to kill her.

Desperate for answers, Aemi and her friends set off to find answers in Arctus, the Ice City, but they might uncover more than they bargained for in the process.

By Sun and Saltwater is the second novel in Kate Avery Ellison sweeping Secrets of Itlantis series and is another beguiling installment that continues to build on the storyline from the first novel and leaves readers raring to dive into the next novel as soon as possible.

After the events of Of Sea and Stone, readers find themselves once more following Aemi, who has just discovered that she is in fact an Itlantean, born Aemiana Greywater, and heir of the Greywater family, a wealthy and prominent Itlantean family. With Celestrus having been attacked and destroyed at the end of the last book by their very own people disguised as the Dron, Aemi and a small group of survivors have sought refuge with the neighboring Itlantean land of Primus and have begun to assimilate and partake in Itlantean events. And yet, as Aemi begins to investigate her family’s history she discovers that not everything is as it seems and soon comes to realize that the attack on Celestrus, ordered by Governor Nautilus of the military city of Volcabus, is only the tip of the iceberg and much more nefarious things are happening within Itlantis and only if Aemi steps up can she and her friends prevent a war….

I’m seriously loving this series so far! The first book introduced readers to a really intriguing world, and in By Sun and Saltwater we have the chance to explore it a little bit more, whilst discovering more layers to it. Author Kate Avery Ellison takes readers on an exhilarating journey with this story that is pure entertainment and fun. Her writing was solid, and I very much enjoyed her storytelling; I’m loving following Aemi and discovering more about her and the world of Itlantis.

Itlantis is a clearly well thought out world; with positions, politics and the art of deception front and center. I thought the inclusion of the Dron was smart and I’m really interested to see what impact they with have on the continuing storyline. Itlantis is facing its own internal dangers having been betrayed by one of its own, but with the Dron believing Itlantis is attacking them, the possibility of an all-out war is one Ellison makes very clear.

Aemi is a great heroine to follow, and I love seeing the story unfold through her eyes. Though months have passed since the events of the first novel, Aemi is still very much the same resilient, young woman she has always been. It’s obvious there’s more growth to be made in her, but already she’s quite capable and willing to stand up for what she believes. I appreciate the fact she hasn’t let her newfound wealth and power go to her head. Of course she still wants answers as to how she came to live in the Village of the Rocks, and why she was taken from Itlantis, but Aemi still seems like the girl we met in the first novel, albeit a bit more confidant and independent.

The relationships and friendships Aemi has with the various characters in this series, including Merelus, Lyssia and Tob, remain quite strong. I really loved the new character of Tallyn, an “etiquette teacher” who is so much more than he seems and who keeps Aemi on her toes, and of course I still adore Nol. Nol is a love interest for Aemi, and though there is some developments to complicate their circumstances further, I have high hopes for them romantically. They’re both from different worlds, and spent their lives part of different social standings, but I think they have great chemistry and I’m certainly going to be vying for them in future books.

Rich in danger, excitement and mystery, By Sun and Seawater is a great follow up to the first book in this series and leaves me very eager to continue on with the series and join Aemi on her journey once more!

Source: Sent for review by the author (Thank you Kate!)
Format: Kindle ebook
Buy it: The Book Depository | Amazon | Barnes & Noble
My Recommendation: Fantasy fans are certain to enjoy this :)
Cover: It goes lovely with the first one.
Will I read sequel/continue with series: Yes. I'm ready for more.