Book Shelf: The Professional (The Game Maker #1) by Kresley Cole 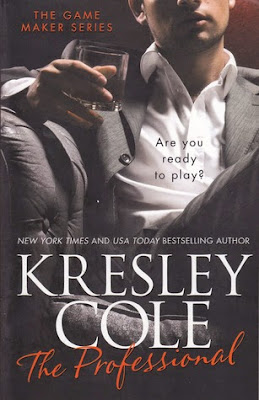 He makes the rules…

Mafiya enforcer Aleksei “The Siberian” Sevastyan’s loyalty to his boss knows no bounds, until he meets the boss’s long-lost daughter, a curvy, feisty redhead who haunts his mind and heats his blood like no other. Ordered to protect her, Aleksei will do anything to possess her as well—on his own wicked terms.

Rules are made to be broken…

Grad student Natalie Porter had barely recovered from her first sight of the dark and breathtaking Sevastyan before the professional enforcer whisks her away to Russia, thrusting her into a world of extreme wealth and wanton pleasures. Every day under his protection leads her deeper under his masterful spell.

Are you ready to play?

Yet all is not as it seems. To remove Natalie from an enemy’s reach, Sevastyan spirits her into hiding. From an opulent palace in Russia to the decadent playgrounds of the mega-wealthy in Paris, the two lovers will discover that even their darkest—and most forbidden—fantasies can come true…

The Professional by Kresley Cole is a sensual feast of passion and erotica that sees Cole explore a world where pleasure and pain mingle and inhibitions are best left at the door in this first novel in her new Game Maker series.

Whilst I’m a novice when it comes to these kinds of novels (I’ve never even read Fifty Shades of Grey!) I am wholeheartedly a Kresley Cole fan, so I knew I needed to read The Professional, regardless of my inexperience in this genre. And in saying that, I thoroughly enjoyed The Professional. The world in which Cole explores is dark, gritty and raw…..and endlessly sexual. Blending together the powerful world of the Russian mafia and organised crime with the underground world of BDSM, Cole deliciously depicts passion and sex in a driven, unapologetic way while still managing to convey and compliment the consensual manner of these experiences.

The Professional is told through the eyes of twenty-four year old Natalie Porter, a history grad student whose life is forever altered when a search for her biological parents leads her to discover that her father is in fact the head of the infamous Russian mafiya. When her long lost father sends his most trusted man and enforcer Aleksi "The Siberian" Sevastyan to protect and escort his long lost daughter to his home in Russia, neither are prepared for the intense and dark attraction that simmers between them. With Sevastyan known for his violent and brutal dealings, his secret desires will push Natalie like never before and open her eyes to a whole new world of pleasure.

One of the things I really thought went a long way to complimenting this novel is that the main character Natalie is no china doll or weak woman. Though she is physically inexperienced at the beginning of this novel, Natalie has a strong sexual appetite and isn’t ashamed of her desires. Through her relationship with Sevastyan, Natalie learns what she does and doesn’t like; pushing herself to the limit and experiencing all manner of sexual situations. Natalie is fiercely attracted to Sevastyan and wants to explore their physical desires for one another, something Cole doesn’t disappoint with; depicting various sexual encounters between Sevastyan and Natalie at different levels of intimacy and BDSM throughout the story.

As Natalie’s love interest and such an important role within the story, Sevastyan is a very complex individual and even now I don’t know how to fully wrap my head around him. He’s had a complicated upbringing and has seen the worst life has to offer. He has some real demons, and learning his secrets really aren’t even the tip of the iceberg in terms of understanding this conundrum of a man. I liked Sevastyan, I did, but he didn’t blow me away as some other males leads have in the past. One thing is clear though; despite his dark desires and past deeds, he clearly adores Natalie and that endeared him to me.

A very large part of this novel focuses on the developing romance and sexual relationship between Natalie and Sevastyan—as to be expected with this kind of novel. It some aspects Natalie and Sevastyan aren’t healthy for each other, but considering the worlds they come from and are a part of, they do manage to better each other too. Kresley Cole writes some very rich and sensual sex scenes that are full of passion, desire and pain and possibly aren’t for the faint of heart, however the storyline was actually quite interesting within this story too.

The Professional explores the power of love, loyalty and family throughout its pages and the revelations about Sevastyan’s past and his family set up the rest of the series wonderfully. Though dark, the world within The Professional is enticing and I’m already ready to read about Maksim and Dmitri…..

Source: Sent for review by Simon & Schuster (Thanks guys!)
Format: Paperback
Buy it: Bookworld | The Nile | The Book Depository | Amazon
My Recommendation: Erotica and romance fans are sure to enjoy this!
Cover: I think the cover is very suave and sexy!
Will I read sequel/continue with series: Yes. I want to read more!