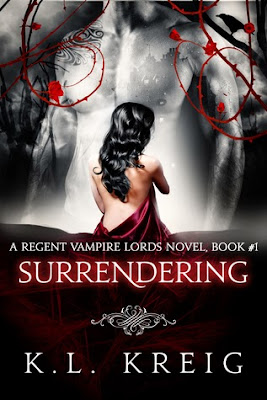 "It’s best if we just keep this casual, Dev.”

To feisty, relationship phobic Kate Martin’s utter surprise, she isn’t automatically dismissed as a crackpot when she finally plucks up courage to walk into a police station, revealing what she’s seen in her dreams. But instead of making a simple statement and returning to her nice, quiet life, she finds herself the center of attention from both a psychotic vampire and the ‘investigative specialist’ who would die in order to protect her.

“You’re anything but casual, Kate. I want you and I always get what I want.”

Young women are disappearing across the country and Devon, Regent Vampire Lord of the Midwest, knows his centuries old archenemy has finally resurfaced. A break in his fruitless search is provided by the discovery of a woman who can not only see the missing in her dreams, but who ends up being his Moira, his Destiny. And she couldn’t have stepped into his world at a more inopportune time, for she is now the prime target for his nemesis.

Protecting her heart would prove to be her biggest challenge.

At least that’s what she thinks.

Surrendering is K.L. Kreig’s debut novel and is the first in her Regent Vampire Lords series. Darkly romantic, simmering and surprising, Surrendering is perfect for fans of J.R. Ward’s Black Dagger Brotherhood and the Midnight Breed series by Lara Adrian!

As someone who highly enjoys a good paranormal romance every now and then, I very much enjoyed Surrendering. Though vampires are something I’ve read numerous times, the world and characters K.L. Kreig has introduced us to are ones I look forward to exploring some more.

Surrendering introduces readers to Devon Fallinsworth, the Regent Vampire and Lord of the Midwest and a man on a mission when it becomes clear that a vampire from his past is behind a string of kidnappings of young women. Furthermore, Dev’s world is forever changed when Kate Martin comes forward, claiming to have information regarding the disappearances. Kate has had dreams for as long as she can remember, but when it becomes impossible to deny her visions have a habit of coming true, the determined dark haired beauty goes to the police, never expecting to find herself in the middle of vampire politics and discovering that she herself is Dev’s long awaited mate.

K.L. Kreig introduces readers to a promising world of vampires in Surrendering. Told through the eyes of Dev and Kate predominately, as well as detective Mike Thatcher and villain Xavier, Surrendering already has me interested in learning about the other characters. I’m already very invested in Mike and Giselle’s potential story and look forward to unwrapping more plotlines in future instalments.

I personally liked both Kate and Dev and thought they went together wonderfully. I liked them as individuals and appreciated what they brought out in each other. There is a bit of instant attraction between them, something enhanced by the knowledge that Kate is Dev’s Moira, his destined mate, but I did like that K. L. Kreig made an effort to force Kate and Dev to get to know each other too.

Other than Dev and Kate, I’m really interested in the other characters as well and that's not even considering the other Regents, Damian and Romaric. I’d love to learn more about Ren, Manny, Giselle and of course Mike, the vampire disliking human detective who is caught up in their world, despite his hate of their kind.

A great start to a promising new paranormal series, I’m looking forward to continuing on with K.L. Kreig’s novels and seeing what she has in store for her characters next!

Source: Sent for review by Progressive Edits and the author (Thank you guys!)
Format: Kindle ebook
Buy it: The Book Depository | Amazon | Barnes & Noble
My Recommendation: Fans of Black Dagger Brotherhood and the Midnight Breed series are sure to enjoy this.
Cover: The cover is really beautiful. I think it's stunning.
Will I read sequel/continue with series: Yes, I'm looking forward to reading more.