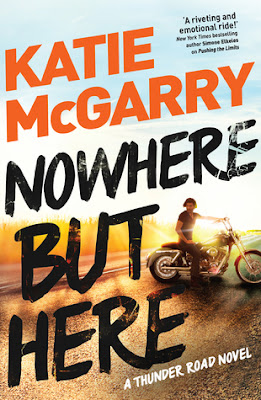 An unforgettable new series from acclaimed author Katie McGarry about taking risks, opening your heart and ending up in a place you never imagined possible.

Seventeen-year-old Emily likes her life the way it is: doting parents, good friends, good school in a safe neighborhood. Sure, she's curious about her biological father—the one who chose life in a motorcycle club, the Reign of Terror, over being a parent—but that doesn't mean she wants to be a part of his world. But when a reluctant visit turns to an extended summer vacation among relatives she never knew she had, one thing becomes clear: nothing is what it seems. Not the club, not her secret-keeping father and not Oz, a guy with suck-me-in blue eyes who can help her understand them both.

Oz wants one thing: to join the Reign of Terror. They're the good guys. They protect people. They're…family. And while Emily—the gorgeous and sheltered daughter of the club's most respected member—is in town, he's gonna prove it to her. So when her father asks him to keep her safe from a rival club with a score to settle, Oz knows it's his shot at his dream. What he doesn't count on is that Emily just might turn that dream upside down.

No one wants them to be together. But sometimes the right person is the one you least expect, and the road you fear the most is the one that leads you home.

Fan favourite and bestselling author Katie McGarry is back to prove she’s not just a one trick pony with Nowhere But Here, an incredibly captivating and arresting novel that kicks off a brand new series from this sensational writer and is guaranteed to bewitch readers all the way until the final page!

Securing a fan in me through her Pushing the Limits series, Katie McGarry cements her place as one of my all-time favourite YA writes with Nowhere But Here. Nowhere But Here is told through the back and forth POV’s of seventeen year old Emily, the biological daughter of one of the heads of a motorcycle club called the Reign of Terror and someone who has been protected from her estranged father’s world for her whole life, and Oz, an eighteen year old club hopeful and member of the biker community who finds himself looking after Emily when the prodigal daughter returns, causing a lot of hurt and pain for those Oz loves the most. Rife with secrets and mystery, both teens couldn’t be more different, but neither can deny the attraction that simmers between them in Nowhere But Here, even as Emily’s family history begins to come to light…..

Following two personable and headstrong characters, Nowhere But Here offers a great cast of characters, particularly our leads, Emily and Oz. Both had strong voices and their own individual quirks and personalities. I loved the depth McGarry gave to Oz and all the Reign of Terror members that we met! Oz was sexy, thrilling and dangerous; but he also had honour courage and came to really adore Emily.

Emily on the other hand was a very natural teenage girl whose world was altered drastically as she slowly discovered that almost everything she thought she knew about herself was a lie and that the relationship between her biological father and her mother hadn’t exactly ended the way either of them painted it to. Emily struggled, and fought and had to come to terms with all that she was learning. I enjoyed following her and thought her genuinely a good heroine.

Nowhere But Here is a YA novel and though McGarry hints at sexual innuendos and makes the occasional sexual comment, she generally keeps things quite clean and it’s the sexual tension and desire expressed by both main characters that heats things up. These are the kinds of attractions and connections I thrive on, and as usual I adored how McGarry developed her romance.

Katie McGarry has me incredibly excited with this new series! Thunder Road as the series is going to be known is the road on which most of the Reign of Terror members live or grew up on….and I’m very eager to learn all about them! McGarry gives Nowhere But Here so much life, depth and colour that the vivid minor characters—mainly those with affiliations to the biker club—bring so much to the story. Chevy, Violet. Stone, Razor, Olivia, Cyrus, Eli….I could go on and on. I’m thinking that the series is going to following the younger generation of the Reign of Terror, but I still look forward to seeing them all again and again.

Passionate, emotional and electrically romantic, Nowhere But Here is a fantastic read and a thrilling ride. Hold on to your hats guys, Katie McGarry is about to kick start a brilliant must read new series!

Source: Sent for review by HarlequinTEEN Australia (Thank you Miranda!)
Format: Paperback
Buy it: Bookworld | The Nile | The Book Depository | Amazon
My Recommendation: This is a brilliant book and a must read!
Cover: It's actually not that great---I mean it's not bad, but it doesn't blow me away either.
Will I read sequel/continue with series: Yes. I can't wait!