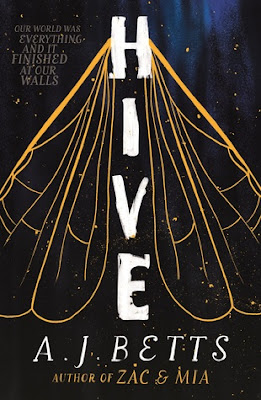 All I can tell you is what I remember, in the words that I have.

Hayley tends to her bees and follows the rules in the only world she has ever known.

Until she witnesses the impossible: a drip from the ceiling.

A drip? It doesn't make sense.

Yet she hears it, catches it. Tastes it.

Curiosity is a hook.

What starts as a drip leads to a lie, a death, a boy, a beast, and too many awful questions.

Hive by A.J. Betts is a unique and original YA dystopian novel that introduces readers to an intriguing and compelling world in the vein of The Handmaidens Tale and Breathe by Sara Crossan.

Living in a world that consists of 6 hexagonal houses connected by corridors, Hayley’s job is to tend to the bees. A good girl, Hayley has always followed the rules in the only home she has ever known until she discovers the impossible; a drip of water coming from the ceiling in one of the rooms. Hayley knows this can’t be—there is nothing outside so where does this water come from? As her curiosity blossoms, Hayley finds herself seeking answers and when a mysterious encounter with a boy leads to only more questions, Hayley soon begins to realise there’s so much she doesn’t know.

A.J. Bett’s novel Hive begins with fifteen year old protagonist Hayley sharing a little bit about her world. Through Hayley’s simple and innocent descriptions we quickly realise that Hayley’s world is not like ours. Set in an unknown time and place, the world Hayley exists in is simple; made up of the Council with its Judge at the head, nurseries where babies are kept and looked after and the rest of the population---Aunts and Uncles and Mothers and Sisters who are all assigned a role and purpose within the community.

A gardener who looks after bees, Hayley’s voice is young and naive. She strives to do good and having known no different, mostly accepts her position in life. Unbeknown to her, the community she exists in is filled with secrecy and deception, mystery and the unknown and while almost everyone accepts what they are told and don’t question anything, there are secrets kept from the overall population that Hayley’s inquisitive nature stumbles upon.

This aspect of Hive really intrigued me. Bett’s depicts her dystopian world vividly and highlights the originality of her story. Part dystopian, part religious sect, the characters in Hive don’t have the same understanding of the world as readers will and it makes you wonder why they are so isolated and unknowing. How did they get to be this way? Why are they so ignorant to the ways of the world? They clearly know no different but manage to function and survive as an operating society.

A.J. Betts brings Hive to a close and ends this chapter of Hayley’s story very well. Concluding this stage of the duology, Hive will leaves readers ready to see what happens and what Hayley will now discover on the “outside”.