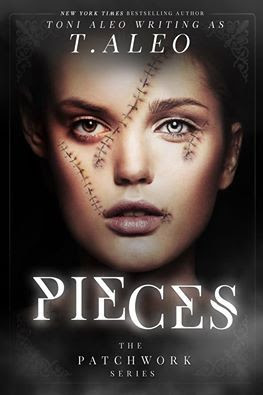 In New York City, an underground society of supernatural beings exists, hidden among everyday humans. They don’t know of our activities or any of our secrets.

The districts of the Works are made up of vampires, wolves, shifters, witches, and I’m in the fifth and arguably most important district, the Patchwork. My father is the leader of our group, and he oversees all of the other factions.

As his only daughter, that makes me the princess of it all. Cool, right? Actually…no.
Sure, I live in a mansion and money isn’t an object, but that doesn’t matter because I can’t leave. I have a guard who follows me around 24/7. My father and three older brothers treat me like I’m a fragile piece of glass, never allowed to take an independent step or make any decisions on my own.
It’s beyond frustrating—especially since my father essentially runs my life.
He says what I do, when I do it, how I do it, and all that jazz. He tests his formulas and new techniques on me. I’m a walking science experiment.
I hate it.
I hate my life here.

But then he comes along: Killian.
He’s just some vampire…or so I thought.

But you’ll have to read my story to find out what I mean. To know my secrets.
Until then, though, allow me to introduce myself. My name is Rebecca von Stein.
And I’m a descendant of Dr. Frankenstein.

Welcome to the Works.

Pieces by T. Aleo’s is the first book in the Patchworks series and is rich in mythology and full of different paranormal creatures. Fast paced and with plenty of twists, Pieces has left me highly eager to discover more of Aleo’s world!

Pieces introduces readers to nineteen year old Rebekah von Stein, whose father heads an underground society of supernatural creatures known as the Works. Made up of five different factions of supernatural creatures including vampires, werewolves, shifters, witches and the Patchwork who are the descendants of Dr Frankenstein, the Works are led and governed by Rebekah’s father in a very mobster-esque manner. As a member of the Patchwork clan, Rebekah is used to her father controlling her life as he attempts to make his youngest child immortal, but when a mysterious vampire named Killian makes an appearance and makes Rebekah’s heart flutter, nothing prepares her for the manner in which her father and her brothers react. Quickly realising there’s more to Killian than meets the eye, Rebekah soon finds herself having to face ugly truths and making a decision that may change her future forever.

The moment I read the description about Pieces, I knew I had to read it. Lucky I was able to obtain an eARC from Netgalley and quickly lost myself in Rebekah’s tale. This book was really fast paced and very addictive to read. Something I loved so much about the novel was how T. Aleo focused around the mythology and descendants of Dr Frankenstein and Frankenstein’s Monster—I haven’t seen this enough in fiction and have loved seeing it explored in Pieces.

T. Aleo weaves together a very intriguing world of supernatural creatures overseen by Rebekah’s father William. I loved the mobster-like feeling surrounding the Patchwork family. There’s still so much I’d love to learn about the witches, werewolves, shifters and vampires and can only hope that Aleo explores other aspects of the world further in future books.

Told through the eyes of Rebekah, Pieces features a protagonist who has a very strong voice. Rebekah was capable and funny and quite eager to prove herself. T. Aleo backs Rebekah up with a great cast of characters who gave the novel some real substance, while setting up a lot of future possibilities. The whole thing felt well thought out with a lot going on in the lives of the other characters, not just Rebekah.

Personally I was really won over by Rebekah’s brothers Oceanus and Cyrus and would love to explore them if the chance ever arose. Oceanus has been struggling with his own forbidden romance and with Pieces ending so abruptly, T. Aleo has a lot of options as to what she may focus on next. Whether the next novel follows Rebekah once more or allows another character to shine, I’m intrigued to see what happens next.

Forward moving and well written, Pieces is a very detailed novel that ends abruptly, but leaves me never-the-less interested to see what author T. Aleo has planned for the series next!