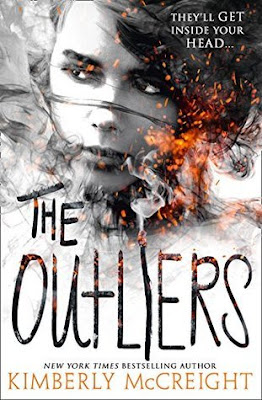 Imagine if you could see inside the minds of everyone around you – your best friend, your boyfriend, your enemies…?
Imagine how valuable you'd be…
Imagine how much danger you'd be in…
Imagine being an Outlier.

Wylie hasn't heard from her best friend, Cassie, since their fight. That doesn't matter when she gets a text from her, asking for help. But as Cassie's messages become increasingly strange, Wylie has a growing sense that something is REALLY wrong. What isn't Cassie telling her? And could finding her be just the beginning?

The Outliers by Kimberly McCreight is a deeply mysterious and unexpected read that will keep you guessing until the final page.

The Outliers introduces readers to Wylie Lang whose estranged best friend Cassie contacts her via text message out of the blue, mysteriously telling Wylie she is in trouble and asking Wylie to come pick her up. Alongside Cassie’s boyfriend Jasper, Wylie travels across the state in a desperate attempt to reach her friend, but when weird things begin to happen, Wylie and Jasper discover that not everything is as it seems.

I’m going to be honest, The Outliers is a really hard book for me to review; mainly because I’ve finished the story and still can’t completely wrap my head around what I’ve read. While I must say kudos to Kimberly McCreight for keeping the mystery up and keeping me guessing until the final page, The Outliers starts out slow and unfortunately keeps this pace. I feel like McCreight wanted to write something really different and really unique, but The Outliers ultimately fell flat. And yet I find myself oddly eager to read the second book.

One of the reasons I think I struggled with this book so much at times is the characters. Wylie had potential, but I felt like she made too many bad choices. Perhaps Kimberly McCreight can redeem her in future novels, but during The Outliers Wylie failed to blow me away. And don’t even get me started on Cassie—Wylie’s supposedly best friend who was a spoilt and selfish individual who didn’t care who she hurt. Jasper I did like; he wasn’t who Wylie thought him to be, although he got the raw end of the stick where his girlfriend is concerned.

I felt like The Outliers only showed us the tip of the iceberg where this plotline is concerned. So much of the story is spent with Wylie and Jasper racing to reach Cassie—we never really get to see exactly what Outliers are and what they can do. Considering I am genuinely interested in reading the sequel when Kimberly McCreight releases it, I’d like to see more focus around the basic part of the storyline.

With The Outliers heating up in the final few chapters and then ending on a bit of a cliff-hanger, I’m intrigued to see what happens next. Ultimately I don’t think this book will be for everyone, but I plan to persevere and recommend this novel for those looking for something a little different.

Source: Sent for review by publisher (Thank you Holly!)
Publisher: HarperCollins Australia
Format: Paperback
Australian RRP: $19.99
Release Date: May 3rd 2016
Purchase: Bookworld | The Nile | The Book Depository | Amazon
Final Thoughts: Despite my issues with this novel, I am genuinely interested in reading the sequel to see if Kimberly McCright can redeem the series and to see what she has in store next!