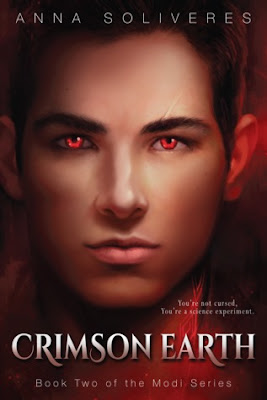 Aeva Storm finally has the answers she’s been looking for since the night she was struck by lightning. She knows who she is—and more importantly, what she is. But her secret isn’t hers alone to keep, and some of those who know the truth will do anything to control her.

In the sequel to the acclaimed Violet Storm, Aeva must decide how far she’ll go to protect her identity and to find her missing sister in a world she hardly recognizes. She must embrace her new life—and her strange new body—if she hopes to save the only place she and her family have left to call home.

Filled with action, mystery, and heartbreak, Crimson Earth finds Aeva, Ruven, and Karth on opposing sides as the war between The False Alliance and the Monarchy draws near.

Can they band together to fight against the evil threatening the City? Or will they destroy each other before the war has even begun?

Crimson Earth is the second novel in Anna Soliveres Modi series and is a deliciously fast paced and exciting sequel that wonderfully supports its predecessor and continues to shape an intriguing, exhilarating and well developed series.

Having finally discovered the truth about what happened to her and why she was modified, Aeva Storm is back, and continuing to masquerade as Queen Violet in an attempt to protect and lead her people until the real Violet is found and can resume the throne. As unease and unrest continues to grow in the City of Light, Aeva and her confidants continue their fight against the False Alliance, headed by a man willing to do anything and everything in his quest for power, including modifying and killing innocent children. Supported by a select group of people who know the truth, including Ruven and Karth, Aeva continues to search for her sister, even as more danger looms for the Monarchy and the only way to defend their land may be to lead the people to war……

I have to say, I very much enjoy this series. Anna Soliveres shapes her world really well and details a very fast paced and exciting storyline that appears well developed and structured. The world within this series is harsh and brutal and delightfully intriguing. I never know what’s going to happen next and Soliveres well and truly keeps me on my toes with her steady revelations and developments.

Aeva continues to be a great heroine to follow and I love her strength, tenacity and capability. Aeva has a lot of insecurities and has so many responsibilities resting on her shoulders, but she really is a great individual to follow. Flaws, insecurities and all, Aeva has been written as a character who is easy to like and who fights for those she loves.

Set alongside a sci-fi/dystopian backdrop Crimson Earth continues to explore an interesting dystopian world where individuals can have their faces, bodies and abilities modified. No one is as they seem with Soliveres introducing and cementing a number of fantastic characters into the series; most notably Karth and Ruven. Personally the romantic in me hopes Aeva and Ruven work out the trials of their friendship/relationship, and I wouldn't be against Karth finding his own romance…..perhaps with a young woman who we finally find in this novel (*wink* *wink*).

Crimson Earth is as fast paced, and possibly even more exciting than the first novel. Anna Soliveres does a fantastic job following up on her debut novel and expands even further on the world, characters and storyline within this series. Weaving together plenty of action, friendship and romance into the story, I highly recommended this series for those who love dystopian reads.

Crimson Earth ends wonderfully—finishing one chapter and beginning the next thrilling one, and leaves me eager to get my hands upon the third novel Indigo Sky as soon as it’s released!