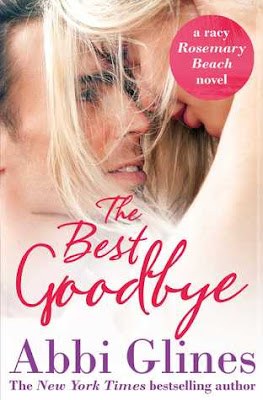 The look on Rose’s face had screamed that she was hiding something. Hell, she’d practically run away from me. There was something to that. I knew there was...

After ten years in the employ of a mysterious crime boss, River “Captain” Kipling is ready to leave his sordid past—and his cover occupation as an upscale restaurateur—behind him. The only thing standing in the way of his “retirement” is his commitment to launch a new restaurant in the resort town of Rosemary Beach. With his sister, Blaire, nearby, Captain can delay his dream of running a humble bar on the waterfront, but the unwanted attentions of his head server, Elle, have him itching to get out.

Until he notices Rose Henderson, the new server at the restaurant. All he knows about the pretty redhead with the cute glasses is that she’s a hardworking single mom from Oklahoma. But there’s something overly familiar about her laugh...something strange about the way she looks at Captain...

The Best Goodbye is the twelfth novel in Abbi Glines Rosemeary Beach series and is another delicious and sexy NA read that follows Blaire’s half-brother Captain and the woman who has always owned his heart!

Having been employed by a major crime boss for the majority of his adult life, River “Captain” Kipling is preparing to leave the past behind him and start fresh. Until a woman comes into his life who reminds him of the lost love that haunts him; the person he has grieved and mourned for a decade and who he’s never stopped loving. Rose Henderson isn’t who she appears, and the new server at Captain’s restaurant is someone who unbeknownst to Captain has searched for years to find the boy—now man—she was forced to leave as a teenager. Determined to discover if Captain is even remotely like the boy she once knew, Rose disguises herself and sets out to discover if she can allow Captain into the life of the most important thing in her world. But as Captain discovers just who Rose really is, dangers from his past rear their ugly head and soon he must make a dangerous play if he ever hopes to protect the most important part of his world…..

Ever since we met Captain in Mase and Reese’s story, I’ve been really excited to read his tale and I really don’t think Abbi Glines disappoints. The Best Goodbye is a solid and entertaining novel that is sweet and endearing and features a lovely romance. Weaving past with present, Glines allows readers into the heart and mind of Captain and allows us to get to know the woman he has always adored.

Captain and Rose were wonderful characters and I deeply enjoyed their relationship. I loved Captain’s dedication to the girl he had always loved and loved seeing Abbi Glines delve into the past. Their childhood romance was extremely sweet. In The Best Goodbye, the present romance wasn’t a romance the way many of the other couples was—it was more a tale of Rose allowing Captain back into her life and into the life of her daughter. I personally thought it was very sweet and nicely done.

I don’t want to give away too many spoilers but I liked that Rose had ties to Captain’s past and thought Abbi Glines wrote their story well. If I’m completely honest, I would have liked The Best Goodbye to have been a bit longer or maybe even split into two novels. Unlike some of the past double books that I didn’t think were necessary, Captain and Rose really would have benefited by having a lengthier story. There was so much to be explored; Captain’s past with Rose, his life as a professional killer and Rose’s daughter. Glines could have written so much more. I loved what I read, but I would have loved even more too.

The Best Goodbye is another rich Rosemary Beach novel that is sure to please fans. With the next novel set to be the last, I can’t even begin to describe how excited I am to read Nan’s long awaited story. I have no doubt it’ll be brilliant!