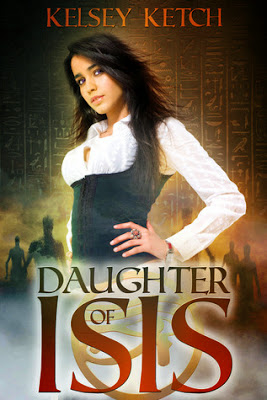 Seth O’Keefe is secretly a member of the Sons of Set, an order that worships the Egyptian god of chaos. Seth’s blessing from Set, his “charm,” never failed, except with one person: Natti Stone. Her ability to elude him infatuates and infuriates him, and he becomes obsessed with the chase. But the closer he gets to her, the more his emotions take a dangerous turn, and he risks breaking one of the most valued covenants of his order. The punishment for which is a fate worse than death.

Kelsey Ketch’s debut novel Daughter of Isis is a really beguiling read that mixes all the brilliance of ancient Egyption lore with modern day fanatics in an enjoyable read featuring plenty of mystery, romance and danger.

I have to say I really enjoyed reading this book. Admittedly I’m a little biased considering I have not only a fierce love for all things ancient Egypt, but also a bit of Egyptian in my bloodline too. I’ve always adored Egyptian lore and myth and in Daughter of Isis, author Kelsey Ketch blends together all the best myths to give us a really intriguing story.

I liked our main character—she was very sassy and her voice easy to follow. Natra "Natti" Stone was easy to relate to and enjoyable to read about. Basically I liked this girl and have nothing bad to say about her. The author wrote her well; giving her the tools to survive as much as possible in this unsuspecting world. I enjoyed seeing Natti stumble through discovering her heritage and fight thoughts forced upon her. I still feel she has a long way to go but I look forward to seeing this.

In all honesty it did take me a little while to become absorbed in the story. It starts out interesting, albeit a tad slow and the plot did get a bit lost amongst the typically teen drama one comes to expect, but it did pick up quite a bit the more as the story progressed and pieces began to fall into place.

I found I really did struggle with the attitudes of some of the characters, mostly the men, in the book and their attitudes towards women. Their blatant disregard for them in all manners didn’t sit well with me. The sexual aspect and the way in which they took control over them, with the women having no say whatsoever wasn’t something I enjoyed seeing. And this is including our male lead and his actions towards the female populace of this high school.

And being said, I did appreciate what the authors has done here on some level; exploring the way the ancient Egyptian society’s beliefs of women impacted and transferred over to the people that still worshiped them within Daughter of Isis. It made sense and I appreciated that.

So in saying this, our male lead Seth is a real confliction for me. In the beginning he really starts out as the epitome of a spoiled rich boy, used to getting everything he wants, when he wants it. He sleeps around like no ones business and while this wouldn’t usually be an issue for me, the fact that he uses his abilities to make women crave him; basically forcing them to want him and cave to him and his sexual desires seemed wrong and a little bit dirty. Then Natti comes along and denies him and suddenly Seth begins to change….I think it’s the immense growth Seth goes through in this book quite quickly that saves him in my eyes. It’s obviously he’s known no different so seeing him begin to question his actions and experience emotions like guilt and remorse when he normally wouldn’t have cared was a nice thing to see. There’s definitely hope for Seth if his later actions in the book are anything to go by.

Ketch writes the romance and relationship between Natti and Seth well. The attraction is there and the want; especially on Seth’s part, but it develops well as the novel progresses and they begin to get to know each other slowly. It’s slow building that deepens as the characters come to know about each other; once more, especially on Seth’s part as he starts to respect Natti and see her differently than his other conquests. The connection and tension is there and I’m eager to see what the author does with their relationship in the next book.

Daughter of Isis progresses though to a really startling and action packed ending. The direction of the story looks more and more promising with the turn of each page, however the abrupt and dissatisfying ending leaves lots to be desired and this reader hankering for the next installment, pronto!

Source: Sent for review by Ya Bound Book Tours and author Kelsey Ketch (Thank you ladies!)
Format: Kindle ebook
Buy it: Amazon | Barnes & Noble | Kobo
My Recommendation: If you're a fan of Egyptian mythology then you're bound to love this!
Cover: I liked it--simple but effective.
Will I read sequel/continue with series: Yes. I want to know more!