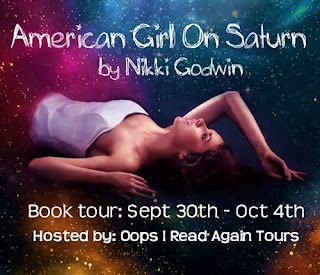 Today the blog tour for American Girl On Saturn by Nikki Godwin presented by Oops I Read Again Tours stores hits The Rest Is Still Unwritten!

I'm super, super excited to be taking part in this tour. I've featured this book before, a few weeks back, but I'm once more sharing as I just loved American Girl On Saturn. It's a real feel good, fangirl treat!

I hope you'll check out my review that was posted previously as well as the guest post Nikki Godwin has kindly written for me today :) There's also a tour wide giveaway going on, so don't miss that!

The inspiration behind American Girl on Saturn 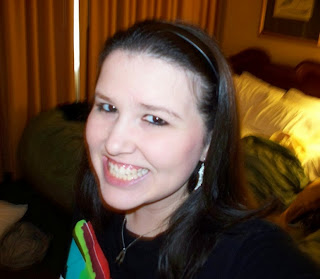 As much as I'd love to take credit for the idea of American Girl On Saturn, it was actually the idea of my sister, Emily. Many months ago, we were in the Taco Bell parking lot when she said, "You know what'd be a good book? If there was a boyband and something bad happened to them, so they had to go into hiding, and they ended up staying with some government agent and his family. And it'd be told from the point of view of the teenage daughter. You know, what it's like to have a boyband crashing at your house and spending your summer on lockdown."

Two weeks later, I was still thinking about this idea, so I asked her if she was planning on writing it. She said it'd be a fun book to read, but it wasn't "her type" of book to write. Then she said, "But you can write it if you want." I was on the couch that night with a bag of colored Sharpies and my One Direction notebook plotting American Girl On Saturn.

To be very honest, One Direction did inspire a lot of this book. How could they not? It's a book about a boyband, and they're only the most famous boyband in the world right now. I adore their music, and I admire their talent and drive to be the best they can be. I also very much respect them for taking on such an insane, hectic life at such young ages. Their music played in the background many nights while writing this.

But they aren't the only band who brought American Girl On Saturn to life. Punk-pop band Simple Plan influenced a lot of little things in this book (like Milo and Noah's middle names, the fact that the guys are from Canada, etc.) and rock band Hawthorne Heights inspired the fictional band Sebastian's Shadow, the main character Chloe's favorite band. Overall, a love for music in general inspired this book. Anyone who has ever fangirled over a band or stood in line for tickets or held tightly to an album to get them through a tough time will be able to relate to this book. Music is a universal language, and this story is a fun romance told from the point of view of a girl who gets to experience music from the other side. 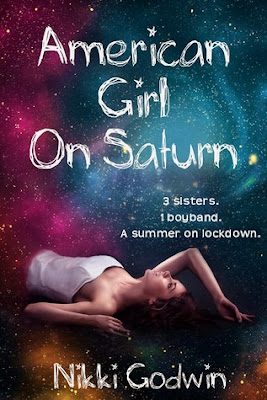 AND.......To celebrate American Girl On Saturn currently being only $0.99 on Amazon I'm going to be giving away a copy to ONE INTERNATIONAL follower. Simply comment with a way to contact you!
**American Girl On Saturn is such a fun book! It's one of those books you read and can't help being giddy over :) I hope you all decide to pick up a copy---you won't be sorry!**