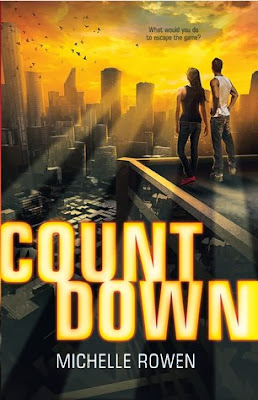 3 seconds left to live. Once the countdown starts, it cannot be stopped.

Kira Jordan survived her family's murder and months on plague-devastated city streets with hard-won savvy and a low-level psi ability. She figures she can handle anything. Until she wakes up in a barren room, chained next to the notorious Rogan Ellis.

Even though both their lives depend on it. Their every move is controlled and televised for a vicious exclusive audience. And as Kira's psi skill unexpectedly grows and Rogan's secrets prove evermore deadly, Kira's only chance of survival is to risk trusting him as much as her instincts. Even if that means running head-on into the one trap she can't escape.

Countdown by Michelle Rowen is an exciting, heart racing story in the tradition of The Hunger Games but featuring its very own unique, and addictive storyline. It's The Hunger Games meets Saw in this fantastic read that blends dystopian with sci-fi and that is sure to please from the get go!

Heading into Countdown, I was really excited. It's my first book by Michelle Rowen, but it sounded so good. I hoped it would live up to my expectations.....and you know what? It totally did! From the very opening pages, I was glued to this story. The stakes were always immensely high; leaving me no choice but to keep reading. I had to know what was going to happen next. And as the story progressed, this stayed the same; Countdown held my complete and utter attention all the way through!

I was really impressed with this story. In a way there's something very simply about the idea, but Rowen's execution is perfect; her writing flawless, lending so much to a really exhilarating story. I liked the way Rowen brought to light little twists and developments over the course of the book that impacted on the story and drove it.

In Countdown, main characters, Kira and Rogan find themselves in an unexpected and shocking situation when they wake up and discover they are in the middle of Countdown; a horrendous game where contestants compete for their very lives over a course of death defying levels to the delight of a group of underground Subscribers who enjoy watching the game. Complete the task on each level and you move on, or fail it and be killed. What ensues is a lot of danger, excitement and shocking revelations as Kira and Rogan must learn to trust each other amidst a game where nothing is as it seems!

I seriously loved Kira! Admittedly, there is a real vulnerable side to her that we get to discover throughout the book, but she really was one brave and feisty heroine. Amidst a bad situation, Kira learns so much about herself and does what she has to do to survive, while still staying true to herself and her morals--I admire this! Basically, she was just one really likable character to follow throughout the story.

As Kira's partner in crime, Rogan proved to be a real conundrum. In the beginning of the book it's clear that there's so much more to this notorious criminal than meets the eye, but it's unclear what. As the reader, I found it thrilling seeing Kira discover the unexpected truth behind Rogan Ellis. Rogan was dark and sexy and a real diamond in the rough. He and Kira form an unexpected bond over the course of the book that had me very satisfied, and often giddy, with their chemistry and connection. Me likey!

From beginning to end Countdown is a thrilling read. There's plenty of story developments to keep things progressing nicely amidst the danger and high stakes that is the game of Countdown. My only issue with this book is that I feel there is so much left to explore about Rowen's world, most importantly Kira's ability and where they've come from. After reading this fantastic story, I find myself crossing my fingers that Michelle Rowen will allow us readers to visit Kira and Rogan once more with a sequel!

Source: Sent for review by HarlequinTEEN Australia (Thank you Polina!)
Format: Paperback
Buy it: Bookworld | The Nile | The Book Depository | Amazon
My Recommendation: Looking for an exciting, fast paced novel? Countdown is it!
Cover: It doesn't really showcase the story inside, but Kira & Rogan are on the front, so I like it =D
Will I read sequel/continue with series: At this point if Michelle Rowen were to write a sequel I'd read it for sure!