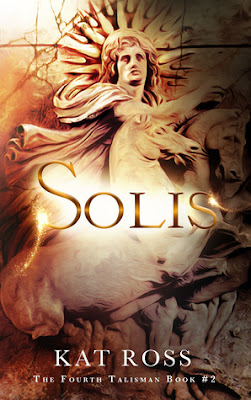 In the second volume of the Fourth Talisman series, Nazafareen’s path takes a twist, setting her on a journey into the heart of the maelstrom…

In Delphi, Nazafareen joins forces with the followers of Dionysius to rescue her friends from the Oracle’s dungeons and seek out the three talismans whose extraordinary powers stopped the Vatras before. With her own breaking magic growing stronger by the day, she must walk a razor’s edge to control her volatile temper. And if the Vatras find the talismans first, their last hope will die.

In the frozen wastes of the Valkirin range, Victor strikes an uneasy bargain with bitter enemies to keep his tenuous grip on the Maiden Keep. The other holdfasts are coming for him. But it’s a traitor within Val Moraine’s walls that may prove to be his downfall.

Solis is the second novel in Kat Ross’s Fourth Talisman series and is another exhilarating, adventure driven story full of excitement, action and thrilling romance that will take readers across a dangerous desert land on the brink of war.

In the heart of Delphi, Nazafareen desperately searches for a way to rescue her friends Herodotus and Javid who have been taken prisoner by the Oracle and are going to be executed. Joining forces with the followers of Dionysius, Nazafareen and her new allies plan a daring rescue as rumours of the Avas Vatras, an ancient clan of daevas known to wield fire simmer across the lands. Unbeknown to Nazafareen, Darius is also being held captive by the cult of Apollo and determined to outlast his captor even as her methods become increasingly violent. Wanting to stop the rise of the Avas Vatras who will surely burn the world to the ground if they escape their otherworldly prison, Nazafareen will need to find three powerful talismans capable of stopping them before her enemies do. Yet as Nazafareen and Darius wage their own fights, will they be able to find their way back to each other or will they be kept apart indefinitely?

I always know when I begin a Kat Ross novel that I’m in for a thrilling tale. Honestly, I’m yet to read a novel written by her that hasn’t been spectacularly told and addictive and Solis is really no exception to this rule. Unfolding in third person and once again following Nazafareen, Darius, Victor and Culach amongst others, Solis was equal measure excitement and adventure with moments of romance and friendship thrown in.

Perfectly written, Solis continues on where the last novel left off and primarily depicts Nazafareen’s continuing journey to find a way to restore her lost memories while finding herself caught in the middle of a much bigger danger driven by the Oracle of Delphi, the Pythia, who has mysterious but clearly evil intentions. Author Kat Ross is yet to make the Pythia’s motives known but it’s clear that her desires for the talismans will play a large part in the continuing storyline of the series and seeing as I’m enjoying getting to know the other societies and divisions this side of the gate, I’m keen to discover what they are down the track.

Nazafareen continues to be a strong character to follow and I feel like she’s as kick ass as ever. I missed seeing her and Darius together in this instalment with the majority of the novel seeing them distances apart although I enjoyed their reunion and continue to lap up any moments that featured Culach—honestly adore this guy; more than I ever anticipated I could!

Ending in an intriguing manner, Solis was another highly addictive and entertaining novel and leaves me keen to see what Kat Ross does next with the third instalment. I have no doubt it will be as thrilling and enjoyable as its predecessors.

Source: Sent for review by publisher (Thank you guys!)
Publisher: Acorn Publishing
Format: Kindle ebook
Release Date: February 19th 2018
Purchase: Amazon | Barnes & Noble | Kobo | iBooks
Final Thoughts: Solis is another great read from Kat Ross that leaves me eager to read the next one as soon as it comes out!