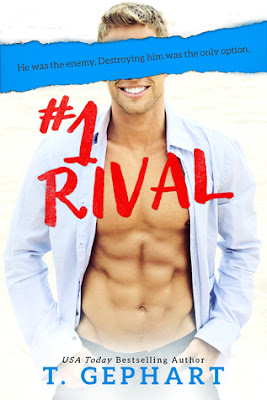 #1 Rival is T. Gephart's latest release and is a severely addictive and sexy enemies-to-lovers tale that will win you over from the very opening page with it's tantalizing chemistry, sharp dialogue and delicious romance!

Lauren Harper hates Roman Pierce. Her colleague and rival at a prestigious law firm, Roman is the bane of her existence. He may be smooth and sexy-as-hell in his perfect suit, but he's also a cocky, arrogant and a self-assured jerk who never fails to push her buttons. So why all of a sudden can't Lauren stop thinking about kissing the arrogant grin off his pompous face....before strangling him to death that is. It's a fine line between love and hate and as Lauren and Roman work together on one of their firms biggest cases, the dynamic between them is about to shift, but will it be for better or worse?

Having just finished #1 Rival, I have to admit I absolutely annihilated this book; seriously! I even chose to put down a novel I was already halfway through because #1 Rival sucker punched me after I read the first few chapters and I couldn't bring myself to put it down. It was just that good.
T. Gephart has outdone herself with this novel. It was flirty, fun and highly addictive.

Main characters Lauren and Rowan had a chemistry that was out of this world, while the storyline and their subsequent romance was electrifying and endearing at the same time. Lauren was a confidant, capable woman able to hold her own in a male dominated environment and was an intelligent and enjoyable main character to follow. Roman while coming across as a "jerk" was actually very charming and likable. Oh and sexy as hell.

The back and fourth banter exchanged by Lauren and Rowan throughout the novel was just spectacular. It was sharp, witty, biting and oh so funny. These two went toe to toe with each other making for some hilarious exchanges and I loved that even as things heated up and developed between them, this dynamic didn't change but instead retained it's chemistry.

T. Gephart includes some sexy as sin encounters between Lauren and Roman while exploring their romance. I loved seeing them so crazy for one another and lost to each other. They were uninhibited and passionate and so sexy together. I definitely felt the balance between their physical relationship and the feelings that grew was written perfectly on Gephart's part. They were believable to follow and I loved seeing how everything played out.

Passionate and thrilling, author T. Gephart will have you hooked by this stellar romance from the minute you begin reading. #1 Rival absolutely blew me away and I can't wait to see who will be featured next and which Larsson brother we may get to follow in the next novel--can't wait!