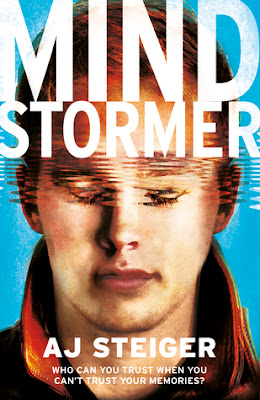 When Lain Fisher wakes up in a hospital bed she can't remember anything of the last few months. As a mindwalker herself she knows about erasing peoples memories. She just never thought it would happen to her. Before she can get any answers to her questions she is rescued by two young men. Ian she remembers, but Steven is a complete stranger. Through accessing her memories, Lain relaizes that IFEN isn't at all what she believed and that before her memories were erased she had fallen violently in love with Steven.

Soon the battle for survival is personal. Lain and Steven join a group of rebel fighters to take on IFEN. But does she love or mistrust Steven? And are the rebel group as bad as IFEN? A twisting, intelligent, enthralling adventure about a future world that might just be on our own horizon.

Mindstormer is the second novel in A.J. Steiger’s Mindwalker duology and brings the series to a climactic close.

When Mindwalker Lain Fisher wakes up in a hospital bed, she has no memory of the last few months. Told she was tricked into aiding and abetting known terrorists, Lain is shocked to learn of her recent actions, although something simmers at the back of her mind, telling her that not everything is as it seems. Then she is rescued by two young men; Ian who she knows and Steven, a perfect stranger. Steven seems devastated by Lain’s lack of memories and as he and Ian find a way to restore her memories, Lain quickly discovers that IFEN are not the organization they proclaim themselves to be and she was deeply in love with Steven before having her memories altered. Fighting back against IFEN seems like the only course of action, but when doing so means bloodshed across the board, will Lain find the strength to do what needs to be done or will IFEN manage to bring the rebels to their feet once again.

I have to say I’ve really enjoyed this duology; a lot more than I anticipated I would heading into it and am sad to see it come to an end. Mindstormer was a well written follow up to its predecessor, although I must admit I didn’t enjoy it as much as I did Mindwalker. That being said, it was still a great book and allowed me to join Lain and Steven once again.

Introducing readers to a new aspects of the series in the form of the Blackcoats and the underground rebellion being waged against IFEN, Mindstromer is told in three parts; the first with Lain having no memories of the events that have recent;y occurred, the second where Lain is “reliving” her memories and we get to experience what has happened in the past and the third where Lain’s memories have been completely restored and she, Steven and Ian are looking to reunite with their allies against IFEN.

Though I understood the reasoning’s behind their actions, I wasn’t a fan of the Blackcoats all too much. They were violent and tyrannical in many of their ways. Their terrorist actions did have an impact and though I applaud them for wanting to change the system, I very much thought Lain’s ideas where better placed overall. As was A.J. Steiger’s plan I guess.

Overall the Mindwalker duology was an enjoyable read, although I think the ending felt a bit rushed and perhaps the series would have benefited from a third installment as things could have progressed slower. That being said, Minstormer explores a bit more of Steiger’s world before bringing it to a close in high stakes fashion!