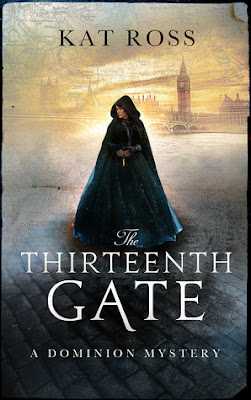 Winter 1888. At a private asylum in the English countryside, a man suspected of being Jack the Ripper kills an orderly and flees into the rain-soaked night. His distraught keepers summon the Lady Vivienne Cumberland—who's interviewed their patient and isn't sure he's a man at all. An enigmatic woman who guards her own secrets closely, Lady Vivienne knows a creature from the underworld when she sees one. And he’s the most dangerous she's ever encountered.

As Jack rampages through London, this time targeting rare book collectors, Lady Vivienne begins to suspect what he's looking for. And if he finds it, the doors to purgatory will be thrown wide open…

Across the Atlantic, an archaeologist is brutally murdered after a Christmas Eve gala at the American Museum of Natural History. Certain peculiar aspects of the crime attract the interest of the Society for Psychical Research and its newest investigator, Harrison Fearing Pell. Is Dr. Julius Sabelline's death related to his recent dig in Alexandria? Or is the motive something darker?

As Harry uncovers troubling connections to a serial murder case she’d believed was definitively solved, two mysteries converge amid the grit and glamor of Gilded Age New York. Harry and Lady Vivienne must join forces to stop an ancient evil. The key is something called the Thirteenth Gate. But where is it? And more importantly, who will find it first?

The Thirteenth Gate is Kat Ross’s latest release and is a thrilling tale of murder, mystery and the demonic set amongst a sharp and gritty Victorian London background that will captivate readers with its beguiling storyline.

London towards the end of the 19th century has been the victim of a series of brutal, almost inhuman murders and the man believed to be the killer, dubbed Jack the Ripper, has just killed an orderly and escaped the asylum where he was being held. Lady Vivienne Cumberland and her associate Alec Lawrence have been tasked by the international agency they work for with tacking down the escaped killer who is far from human. Vivienne and Alec have a unique history and connection to the underworld creatures that plague London, but Jack may be the worst they’ve ever faced. Across the Atlantic Ocean, sleuths Harrison Fearing Pell and John Weston are beginning their careers with the Society of Psychical Research but their first case isn’t going to plan. None of the clues make sense and what’s worse is that everything they do understand points at a sinister supernatural connection. Investigating the murder of an archaeologist leads the duo to some troubling discovers and with the danger greater with every discovery, what will it take to stop the killer at work? And will they be brought to justice before it’s too late?

At first I was disappointment over the possibility of following a new set of main characters as I had previously enjoyed following Harry and John in The Daemoniac, but as soon as I discovered who Vivienne and Alec were, I couldn't have been more ecstatic to join them once again. So much has changed but Vivienne still features the capability, strength and tenacity that make her a strong female lead and Alec is still the kind individual he has always been. The Thirteenth Gate sheds some light on the current relationship between Vivienne and Alec and I'm intrigued to see where Ross plans to take things.

Kat Ross details such a raw, gritty and passionate setting within The Thirteenth Gate which feels authentic, and fills it with complex, intriguing characters. Set during the late 19th century, Ross depicts wonderful explorations of medicine, science and magic and introduces new friends and old enemies, possibly turned allies, to the novel.

Danger rises with the turn of every page and the haunting ghouls and daemons that threaten society make for highly interesting reading. Mysterious and beguiling, The Thirteenth Gate kicks off The Dominion Mysteries wonderfully and leaves me eager to see what Kat Ross plans for the series next!


Read the prequel today for FREE!