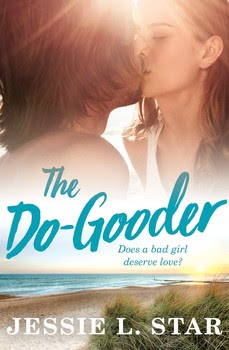 Does a bad girl deserve love?

Lara Montgomery is no good. But she’s used to it by now – her high school reputation has followed her all the way to Bay University. She tells herself she doesn’t care, but a small part of her hopes she can neutralise the bad karma by doing good deeds for anyone who asks.

She’s really good at it, even if she does say so herself. But deep down, she knows there’s one thing she can never make better, no matter how many problems she solves . . . On the night her brother died, she was off hooking up with his not-so-single best friend, Fletch.

It’s been three years since that night, and Fletch has had it with Lara’s do-gooding – it only reminds everyone in their small university town about what they did. But Lara is determined to wipe the slate clean, even if it means heated arguments with Fletch whenever they meet on the way to class.

Trouble is, there’s more than just heat between Lara and Fletch – there are sparks and fire that can’t be ignored, and no amount of do-gooding is going to get rid of that.

The Do-Gooder is Jessie L. Star’s recently released novel and is an emotional and intriguing NA about redemption, self-deprecation and the power to forgive oneself.

Lara Montgomery is not a good girl…far from it. She has a reputation and an attitude that’s seen her scorned by the majority of her peers at the University she attends. And it doesn’t help that Lara’s biggest regret is that she was hooking up with her older brother’s not-so-single best friend the night he died. Three years may have passed, but that hasn’t stopped the rumours from plaguing Lara’s life and her mistakes from mounting. Now Lara spends her days accomplishing good deeds for others in an effort to turn her bad karma around. Fletcher Townsend has always been Lara’s weakness and he hers. All he wants is for her to let go of what happened all those years ago, but as their relationship is more crash and burn than anything else, Fletch and Lara can’t be in the same room without getting into an a verbal sparring match. Can Fletch convince Lara to let go of her guilt? Or will her determination to make amends destroy any chance she has at happiness?

I want to be honest, The Do-Gooder seems to be different than a lot of the NA novels I’ve read in the past. Though there is plenty of the sex, drama and angst that is typical of these kinds of novel, the overall feel and tone of the book seems to be gloomier than I’ve seen in most NA stories. And I think a lot of that stems from the main characters, Lara and Fletch who have a very dysfunctional relationship.

Lara was a hard character to really get behind and she wasn’t altogether likable most of the time. She was self-deprecating, angry, moody, bitchy and prone to acting out. Oddly enough she embraced the way in which people saw her and played up to their low expectations of her. I’ve never really read about a character like her before, so being inside her head was a new experience for me. It was actually very sad to see someone with much attitude and persona have so little self-worth. She genuinely believed that all the unkind and untactful words spoken about her were stemmed in truth.

Though The Do-Gooder was entertaining and had some really shining moments, there were a few times when I very much struggled with connecting Lara and Fletch. I really wanted to, but I found myself at odds with the way in which they often reacted. I wanted to see them end up together and I wanted them to overcome their demons, but I wasn’t as invested as I wanted to be. I can’t put my finger on it, but something kept me from connecting to the extent I’d hoped for.

Source: Sent for review by publisher (Thank you guys!)
Publisher: Simon & Schuster Australia
Format: Paperback
Australian RRP: $29.99
Release Date: June 2017
Purchase: Bookworld | Booktopia | Amazon
Final Thoughts: A NA tale with a different feel, I'll be on the lookout for more by this author in the future.