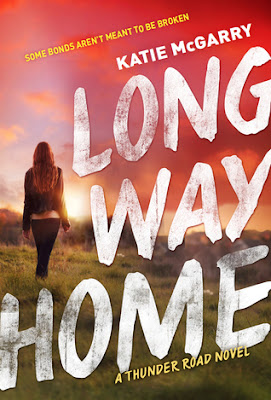 Seventeen-year-old Violet has always been expected to sit back and let the boys do all the saving.

It’s the code her father, a member of the Reign of Terror motorcycle club, raised her to live by. Yet when her dad is killed carrying out Terror business, Violet knows it’s up to her to do the saving. To protect herself, and her vulnerable younger brother, she needs to cut all ties with the club—including Chevy, the boy she’s known and loved her whole life.

But when a rival club comes after Violet, exposing old secrets and making new threats, she’s forced to question what she thought she knew about her father, the Reign of Terror, and what she thinks she wants. Which means re-evaluating everything: love, family, friends . . . and forgiveness.

Caught in the crosshairs between loyalty and freedom, Violet must decide whether old friends can be trusted—and if she’s strong enough to be the one person to save them all.

Long Way Home is the third novel in Katie McGarry’s Thunder Road series and is another emotionally driven tale, this time focusing on teen lovers Violet and Chevy as they attempt to navigate their lives as children of an MC club and individuals with their own wants and desires…..

Seventeen year old Violet has grown up with the Reign of Terror motorcycle club. Her late father was a member and Violet is well versed in the Terrors attitude towards women sitting back and letting the men take charge. Ever since her father’s death, Violet has done everything she can to distance herself from the club, angry over their role in her father’s passing, but when she and her ex-boyfriend are kidnapped by a rival club, Violet finds herself discovering secrets long protected. In order to protect those she loves, the headstrong teenager has no choice but to face all her fears, even if it means putting her life and heart on the line. Chevy McKinley is a legacy; the son of a Reign of Terror member and the grandson of the club president. He knows when he turns eighteen he’ll be expected to patch in. Chevy loves the club, but having already lost the girl he adores when he made a choice she didn’t like, Chevy finds himself struggling with what he wants for his future. Then an unexpected development gives Chevy not only the opportunity to win Violet back, but to discover all the secrets about his father those around him have always kept. Suddenly the future isn’t so black and white and both Chevy and Violet will have to lay it all on the line if they want to come out in one piece….

Long Way Home is another wonderful read from Katie McGarry that continues a very easy to read and satisfying series. Told from the dual point of views of characters Violet and Chevy, who we’ve interacted with numerous times throughout the series, Long Way Home is a story of forgiveness, strength and the power of deciding for yourself who you want to be. Well told, exciting and romantic, Long Way Home keeps readers reading along to see how Violet and Chevy will get themselves out of the sticky situations they find themselves in.

Having witnessed the turbulent relationship between Violet and Chevy in the first two books, it was wonderful to see them finally face the feelings and love still burning between them in Long Way Home. There was a lot of anger and sadness in Violet and so much of that stemmed from her father’s death. In Long Way Home, Violet must learn to let go of her anger and forgive those in her life while Chevy has to decide if he wishes to forge a path outside the club.

As characters, I did like both Violet and Chevy, although I think I prefer Oz and Emily and Razor and Breanna over them. I was very excited to finally explore them as the focus of their very own story, especially Violet. While I wasn’t necessarily disappointed, I wasn’t as blown away as I expected to be. That being said, I still think Katie McGarry did a good job writing them as characters and thought their developments sweet and endearing within the story.

As this third novel comes to a close, I’m still excited about the possibility of there being further books in the series. Breanna’s best friend Addison is still someone I want the chance to see feature in her own story and with references made in Long Way Home to a new club prospect who seems interested in her, I have hopes McGarry may write a fourth book. I’m also keeping my fingers crossed for a novel or novella featuring Terror member Pigpen who is attracted to Chevy’s teacher. Pigpen made me smile and he is charming enough that I think he can win over the straight-laced teacher if given the chance.

Ending Long Way Home in a hopeful and endearing way, Katie McGarry proves once again why she’s one of the go-to authors of contemporary YA fiction. I’m very much keen to read whatever she releases next!