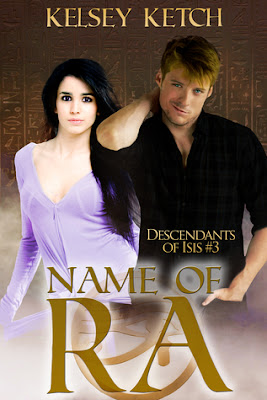 After being on the run from a psychotic cult for a week, Natara “Natti” Stone has finally come to realize she and Seth are the only two people standing between the Sons of Set and the secret name of Ra. Holding a part of the key that unlocks Ra’s power, they relocate to a more isolated location in the California mountains. While laying low, Natti becomes even more determined to understand her mother’s bloodline and her blessing from the goddess, Isis. But when she starts seeing the truth behind her destiny, she begins to doubt her role in the events that are about to unfold.

Then the unthinkable happens . . .

All Seth O’Keefe wanted was to get Natti as far away from his father and the Sons of Set as possible. Unfortunately, after hearing of Natti’s destiny from Isis’s own lips, he realizes they have bigger issues to worry about. Especially when one stupid slip up leads the god of chaos himself straight to their doorstep. Now Natti is the god’s prisoner, and Set holds the key to unlocking the location of the secret name of Ra. Can Seth save Natti from her own destiny and thwart the demented god’s rise to power?

Name of Ra is the third and final novel in Kelsey Ketch’s Descendants of Isis trilogy and brings the series to a powerful and endlessly exciting conclusion!

After the events of Son of Set, Natti and Seth are on the run. Having rescued the woman he loves from being a sacrifice to the god Set, Seth is keen to keep Natti as far away from the Sons of Set as possible. Yet when Set rises and manages to take Natti prisoner, Seth and Natti find themselves in a race against time, not only to get Natti out of the evil God’s clutches, but to stop Set from discovering Ra’s secret name and obtaining untold power. Trapped as Set’s prisoner, Natti is subjected to the god’s attempts at seduction, and must come to embrace her true destiny, lest she be tricked into becoming Set’s queen and seeing him rule the world…..

I must say, I have enjoyed reading this series and will be sad to see it go. Kelsey Ketch has done a great job weaving together her world, and I’ve enjoyed seeing the story unfold through both Natti and Seth’s eyes. Well written, Descendants of Isis has been a fast paced and exciting series, although a lot of the content wouldn’t be suitable for a younger YA audience due to the sexual themes and situations depicted in the books.

Having been to hell and back, Name of Ra is the final chance for Natti and Seth to stand against Set and stop him from taking control of untold power. Personally I think both Natti and Seth have come a long way in this series; especially Seth who grew up in the Sons of Set who believed women were their playthings and who took what they wanted, when they wanted. It was only through loving Natti that Seth came to realise just how wrong most of his actions were, and I think this really helped shape who he is by the end of this book.

A lot of history comes to light in Name of Ra, and much of what Natti’s mother and Seths ancestors went through fall into place. We discover the meaning behind the prophecies surrounding Natti and finally discover just what Isis meant for her all along. Stakes have never been as high for our two lovers are they are in Name of Ra, and I have to give Kelsey Ketch props—she really makes you feel their desperation. Especially towards the end and once they are in the clutches of Set, considering he has the ability to do unspeakable things to Natti. It’s very powerful to read about, especially when tragedy strikes.

Fast paced, exciting and riveting, Name of Ra is a great way to conclude the series. I’m sad to say goodbye to Natti and Seth, but I’m thrilled with the way Kesley Ketch brings this series to a close and am thoroughly glad I’ve taken the time to read these books!

Source: Sent for review by YA Bound Book Tours and the author (Thank you ladies!)
Format: Kindle copy
Buy it: Amazon | Barnes & Noble | Kobo | Smashwords | The Book Depository
My Recommendation: If you love Ancient Egyptian myth you'll love it.
Cover: Fits well with the other books in this series.
Will I read sequel/continue with series: This is the final book in this series, but I wouldn't rule out reading more by Kelsey Ketch