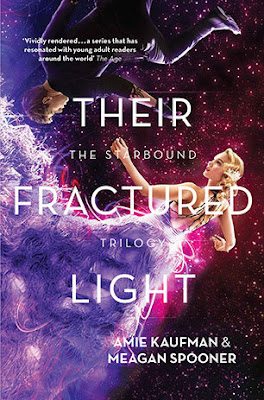 A year ago, Flynn Cormac and Jubilee Chase made the now infamous Avon Broadcast, calling on the galaxy to witness for their planet, and protect them from destruction. Some say Flynn’s a madman, others whisper about conspiracies. Nobody knows the truth. A year before that, Tarver Merendsen and Lilac LaRoux were rescued from a terrible shipwreck—now, they live a public life in front of the cameras, and a secret life away from the world’s gaze.

Now, in the center of the universe on the planet of Corinth, all four are about to collide with two new players, who will bring the fight against LaRoux Industries to a head. Gideon Marchant is an eighteen-year-old computer hacker—a whiz kid and an urban warrior. He’ll climb, abseil and worm his way past the best security measures to pull off onsite hacks that others don’t dare touch.

Sofia Quinn has a killer smile, and by the time you’re done noticing it, she’s got you offering up your wallet, your car, and anything else she desires. She holds LaRoux Industries responsible for the mysterious death of her father and is out for revenge at any cost.

When a LaRoux Industries security breach interrupts Gideon and Sofia’s separate attempts to infiltrate their headquarters, they’re forced to work together to escape. Each of them has their own reason for wanting to take down LaRoux Industries, and neither trusts the other. But working together might be the best chance they have to expose the secrets LRI is so desperate to hide.

Their Fractured Light is the third and final novel in the Starbound Trilogy by authors Meagan Spooner and Amie Kaufman, and marks the first time our six main characters have been united together in their fight against LaRoux Industries and the whispers, in a conclusion that is tension-filled, exciting and fast paced all the way to the very end!

Their Fractured Light introduces readers to two new leading characters, Gideon Marchant, a hacking genius who has made a name for himself as the Knave of Hearts, and Sofia Quinn an enchanting con artist who have more in common than either could imagine; both are determined to take down LaRoux Industries and the man behind the devastating company, Roderick LaRoux. Drawn together under extreme circumstances, both Gideon and Sofia have no choice but to team up with the other and soon both guarded teens begin to care about more than destroying their shared enemy; they begin to care about each other.

The Starbound Trilogy has been absolutely brilliant to read. Following three different couples, and told from their varying POV’s these books have been wonderfully paced, plotted and woven together. Spooner and Kaufman once more expertly weave their story together in Their Fractured Light. For two writers writing together, they truly do so effortlessly. Their writing is deliciously detailed, flowing and lyrical and the picture they paint within this series is never anything less than perfect.

This third novel is told through the eyes of Gideon and Sofia, another pair of brilliant individuals who have been heavily effected by Roderick LaRoux and the atrocities he has carried out across the universe. I really liked Gideon and Sofia. Gideon won me over with his cheeky smile and his light-hearted, flirty nature towards Sofia that paves way to an intelligent and kind soul at his base who comes to quickly care for Sofia. While Sofia on the other hand, won me over with her quick-thinking nature and her desire for justice.

Spooner and Kaufman write another beautifully explored romance between their main characters and will no doubt win over readers with the lovely chemistry and attraction that simmers between Gideon and Sofia. As a reader, I found it wonderful to see them begin to trust and care about the other. In the middle of a war and against so many odds, Gideon and Sofia connect and find themselves falling for the other—it was beautiful.

Having now followed three different couples, it was brilliant seeing them all come together in this final book. Lilac, Tarver, Flynn and Jubilee join Gideon and Sofia in Their Fractured Light as their individual fights against LaRoux join together. There’s a lot of danger and high stakes as our heroes take their final stand. I must say, I really enjoyed seeing come to light how each and every one of their lives were intertwined in this book. Little pieces of their pasts here and there are explored and explained by both authors and I found this really well done.

As far as finals in a series go, Their Fractured Light was extremely well done. Meagan Spooner and Aime Kaufman wonderfully tie things together, whilst featuring an exciting conclusion that isn’t lacking in dire stakes or passion.

Though I’m sad to see this trilogy conclude, I have to commend Spooner and Kaufman for consistently releasing wonderful instalments featuring strong characters and powerfully entertaining storylines. An excellent series for those who love fantasy and sci-fi, The Starbound Trilogy concludes wonderfully with Their Fractured Light and I highly recommend those who haven’t read this series to do you—I doubt you’ll be disappointed!

Source: Sent for review by Allen & Unwin (Thanks guys!)
Format: Paperback
Buy it: Bookworld | The Nile | The Book Depository | Amazon
My Recommendation: This is a brilliant sci-fi series and something I think all YA lovers should try. Cover: This cover, like with all of the covers in the series is STUNNING!
Will I read sequel/continue with series: This is the final book, but I look forward to reading more from both authors in the future.