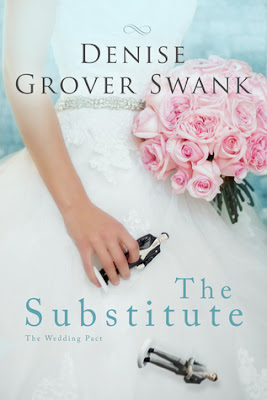 Megan Vandemeer meant to tell her parents about her broken engagement, but a month and a half later she finds herself boarding a plane home to her wedding. Having stretched avoidance to its limits, it's time to come clean--a terrifying prospect since her mother is sure to blame her rather than her cheating, emotionally frigid ex. A couple of drinks and two Dramamine later, Megan finds herself spilling her sob story to the tall, dark, and handsome stranger in the seat next to her.

With only one week left to save his business, Josh McMillan boards a plane to Kansas City in a last-ditch effort, leaving the details to chance. An unexpected answer is delivered in the form of the beautiful brunette beside him. Though she’s completely loopy, her honesty, openness, and humor charm him. So when she passes out before landing, he helps her off the plane--a good deed that leads to a colossal misunderstanding. Her parents assume he’s her fiancé. In a twist of fate, the mix-up might help Josh save his business, so he plays along, figuring he can help Megan too. All he has to do is stage a public break up convincing enough to appease her mother.

Josh is only supposed to be a substitute groom, but the more time he and Megan spend together, the more their pretend engagement starts to feel real…and the less they want to break it off. Can a relationship that began as a farce turn into happily ever after?

The Substitute by Denise Grover Swank is a fun, feel good romance that kicks off a promising contemporary series from Swank titled The Wedding Pact and takes readers on a fresh, enjoyable adventure that sees two people brought together through fate and falling in love……

The Substitute is one of those novels that’s just plain fun and is sure to please those like myself who are hopeless romantics. The Substitute has such a feel-good aura to it that reminds me of a good rom-com that you can’t help but get lost in.

Told through varying POV’s, The Substitute introduces readers to Megan Vandemeer, a young woman who finds herself boarding a plane to head home for her wedding….a wedding she doesn’t see going ahead considering she and her fiancé broke up weeks before. Still too terrified to tell her parents despite the big day looming, Megan drowns her worries in couple of drinks that mixed with the motion sickness tablets she takes prior to boarding, see her spill her secret to the handsome stranger she’s seated next on the plan…..a stranger with a secret of his own.

Josh McMillan is willing to do anything to save his late father’s business, even if it means racing across the country on a crazy scheme not guaranteed to succeed, but when he finds himself helping the beautiful woman seated next to him, the last thing he expects is to be caught up in an even more crazier plan. Mistaken for her fiancé, Josh and Megan must figure out how to convince her family they're a real couple before a planned break up that will save Megan a whole lot of pain and embarrassment. Yet when the lies begin to feel real and Megan and Josh begin to fall for each other, will Josh’s secrets be the thing that tears them apart?

With solid writing and a fantastic pace, the storyline within The Substitute is really entertaining. I mean, it sounds like something out of a fantastic romantic movie, and Denise Grover Swank never fails to keep you smiling and laughing with this story. Featuring two lovely main characters and an endearing storyline, The Substitute is littered with a great cast of supporting characters that give it life. From Megan’s hilarious Gram who has a fondness for nudity, her mother who loves nothing more than order and schedules and her best friends who both help and hinder her and Josh’s developing relationship—you’ll want to get to know them all!

There’s no denying that Megan and Josh’s relationship moves fast and hard. Two people—complete strangers—falling in love over a matter of a few days seems a bit farfetched, but it’s really hard to be put off while reading The Substitute by this fact. Megan and Josh spend a lot of time together and do actually get to know one another; building on the initial attraction between them. If you enjoy the idea of love at first sight, true love or just simply knowing when you meet the person you want to spend the rest of your life with, then you’ll appreciate Josh and Megan’s relationship. Just like I did!

Sweetly told and entertaining, The Substitute is a great contemporary read that will definitely entertain. Having been introduced to Blair and Libby, the leading ladies in the second and third books, I’m looking forward to continuing on with The Wedding Pact series and seeing them find their HEA’s also!

Source: Purchased by me at Fictionally Yours Melbourne
Format: Paperback
Buy it: The Book Depository | Amazon | Barnes & Noble | Kobo
My Recommendation: If you like feel-good contemporary with a rom-com feel, this is for you!
Cover: Simple, but fitting.
Will I read sequel/continue with series: Yes.