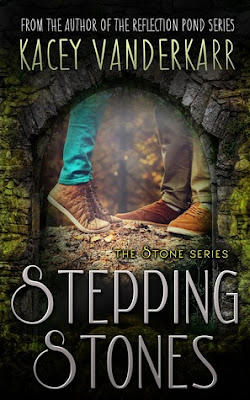 Stepping Stones is author Kacey Vanderkarr’s latest release and is a mysterious novel that will having you guessing all the way until the very end.

Told through the eyes of seventeen year old Onnaleigh Moore, Stepping Stones sees Onna’s life begin to crumble when her beloved older brother is killed in a car crash and her parents’ marriage deteriorates. With her brother gone, her mother absent and her father wallowing in grief over his lost son and lost marriage, Onna finds herself experiencing endless pain and with the worst yet to come, Onna discovers that the new guy at her school Everett may have more answers to the strange things Onna has begun to experience than she ever could have expected.

In all honesty Stepping Stones was a bit of a hit and miss for me; which is a real shame as I’ve previously enjoyed Kacey Vanderkarr’s work. I could see where she was going with Stepping Stones and I think it held potential but it just didn’t quite get there for me.

There was plenty of mystery to be found in the story, and it’s clear that Vanderkarr has made a real attempt to create something unique and different. Now I won’t give away spoilers, but the young man our heroine finds herself drawn to isn’t exactly normal, but who and what he is remains different and offers a lot of possibilities for the rest of the series.

For the most part I liked Onna. She was a tough cookie and considering she was delt blow after blow after blow, she managed to hang in there pretty well. You can’t help but feel for her and all the pain she is experiencing. Her whole world is taken from her and its quite emotional at times.

I really liked Onna’s late brothers girlfriend Cora and thought she was a really sweetie. She suffered too and I really wanted some happiness for her. I liked Everett as Onna’s love interest and thought they had potential as a couple. It’s not really an instant-love kind of situation, but there’s no denying the attraction is there from the beginning. With Everett’s history, I do wonder what Vanderkarr plans to happen with Onna and Everett next.

The one character I wasn’t actually a fan of in this story was actually Onna’s best friend Hannah. Though I appreciated Hannah’s commitment and dedication to her friend, I didn’t like her as a person. Her questionable morals and her inability to be faithful to her boyfriend combined with her grating personality begun to really wear on my nerves as the novel progressed. It seemed like whenever Hannah was in the story it became overtly dramatic and filled with silliness that didn’t need to be there in my mind.

Despite some misgivings I had with Stepping Stones, on the whole I did enjoy reading it. Kacey Vanderkarr includes some surprising twists that impact Onna’s life and I’m interested to learn more about those like Everett; enough so that I would like the chance to read the sequel upon its release……

Source: Sent for review by the author (Thank you Kacey!)
Format: Kindle ebook
Buy it: Amazon
My Recommendation: After something different? This might be it......
Cover: I think this cover is really beautiful--simple, but beautiful!
Will I read sequel/continue with series: As a fan of Kacey Vanderkarr, I would like to read more, yes......