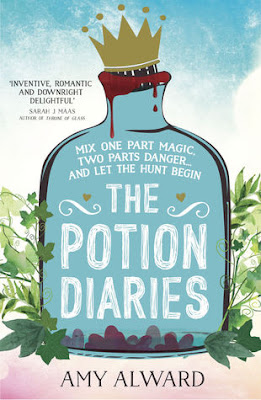 When the Princess of Nova accidentally poisons herself with a love potion meant for her crush, she falls crown-over-heels in love with her own reflection. Oops. A nationwide hunt is called to find the cure, with competitors travelling the world for the rarest ingredients, deep in magical forests and frozen tundras, facing death at every turn.

Enter Samantha Kemi - an ordinary girl with an extraordinary talent. Sam's family were once the most respected alchemists in the kingdom, but they've fallen on hard times, and winning the hunt would save their reputation. But can Sam really compete with the dazzling powers of the ZoroAster megapharma company? Just how close is Sam willing to get to Zain Aster, her dashing former classmate and enemy, in the meantime?

And just to add to the pressure, this quest is ALL OVER social media. And the world news.

No big deal, then.

The Potion Diaries is a unique debut novel by Amy Alward that weaves adventure and magic together with a hint of romance in a fairy-tale like manner that mingles with modern technology to create a tale perfect for fans of The Princess Diaries and fantasy lovers alike.

Introducing readers to the fictional kingdom of Nova, The Potion Diaries follows Samantha Kemi, a member of a once renowned family of alchemists who has the opportunity to redeem her family’s good name and fortune when Nova’s princess Evelyn accidently ingests a love potion she made that was not intended for her. In order to save their beloved princess, the King and Queen of Nova call a Wilde Hunt, a dangerous quest where alchemists from all over the kingdom set out to gather ingredients to recreate and cure the princess of the love potion that ails her. With Evelyn getting worse with every passing moment, Sam’s talent for mixing potions sees her journey all over the world to collect the ingredients needed for the cure. Danger, deception and possibly even love await her if she has the courage to do what others can’t.

I want to be honest here, while I genuinely liked The Potion Diaries, it didn’t blow me away like I had thought it might heading into the story. I still found Amy Alward’s debut a fun, enjoyable and easy read. It had all the elements I enjoy within a YA fantasy and I do look forward to reading more of the series as the stories are released.

Amy Always has created a very interesting world within The Potion Diaries. It’s a delightful blend of the everyday modern world, magic and fairy tale elements. Aspects of technology, social media and science blend together with traditional medicine, potion mixing and magic during the story to help create an almost fairy tale aura surrounding the story. Different creatures, abilities and settings create a beguiling world where I honestly didn’t know what would happen next.

My issue with The Potion Diaries was that I felt it was missing something; something I just couldn’t name and still can’t put my finger on. That extra something that makes you sit back and really take stock of a story. I loved the concept, thought the execution was pretty good and enjoyed the characters, but I just wasn’t completely won over at the same time. I’m looking forward to reading more and seeing what happens next, but I still felt The Potion Diaries was missing that something extra that could have taken it from being a nice read to the next level.

Our main character was someone I did like and I think she fit the story well. She had a nice blend of fire and vulnerabilities and came across as a really normal teenager amidst this magical world. The vision she had for her family was lovely and I liked that she wanted to improve their lives. The fact that she cared deeply about them resonated with me.

Sam is joined by a nice supporting cast of characters. Amy Alward writes Sam’s family and friends with just enough personality and depth to get the story that added extra life. Admittedly I wasn’t won over by Zain and his romance with Sam. I think they have potential and were sweet, but I don’t feel them as a couple yet. I’m hoping Alward plans to explore them more in future novels though as I am hoping that will change.

On the whole, The Potion Diaries was a good debut novel and definitely worth a read if you want something different than a lot of typical fantasy out there. Amy Alward sets up an intriguing world that houses a lot of possibilities and with a sequel promised, I’m interested to see what Amy Alward has in store next.

Source: Sent for review by Simon & Schuster (Thanks guys!)
Format: Paperback ARC
Buy it: Bookworld | The Nile | The Book Depository | Amazon
My Recommendation: Fans of fantasy with a modern twist will enjoy this.
Cover: I'm not really a fan of this cover. It looks corny.
Will I read sequel/continue with series: Yes, I would like to read more.....