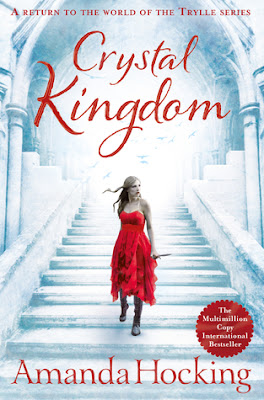 Bryn must decide: follow her head or her heart.

Thrown into a world of suspense and intrigue, Bryn now has to fight to clear her name. But she's not alone. With help from the Trylle - including Finn Holmes - she's on a quest to discover the truth.

With her life and her world on the line, will Bryn be able to risk it all?

Crystal Kingdom marks the third and final book in Amanda Hocking’s Kanin Chronicles and is a fast paced, heart-pounding and exciting way to end what has been a sensational series!

After the heartbreaking death of her friend Kasper in Ice Kissed, Bryn Aven is on the run. Having been blamed for his murder alongside the Skojare Prince and branded a traitor, Bryn is facing charges of treason should she return to Doldastam. Teaming up with Konstantin Black in an unexpected alliance, Bryn soon begins digging into her Queen’s past when tragedy strikes the Kanin royal family and Queen Mina takes control of the kingdom. The malicious and deceptive nature of the Queen push Bryn and those she knows to take drastic chances, even if it means going to war against the Kanin people, practically guaranteeing that not everyone Bryn loves will make it out alive…..

Having now read Amanda Hocking’s Trylle series, Kanin Chronicles and half of her Watersong quartet, I can easily say that the Kanin Chronicles is without a doubt my favourite! I fell in love with Bryn and all her friends quite quickly in the first book and over the course of the other two, only came to be more invested in their journey, lives and actions with the turn of every page. Crystal Kingdom is well written, detailed and incredibly fast paced. It sees Bryn make some real discoveries, with the mystery behind Queen Mina’s actions finally revealed. It’s an emotional read with Bryn having to make tough decisions, and not everyone we know and love are guaranteed to make it out alive.

Bryn has been such a great character since the very first novel and I’m glad Amanda Hocking has still managed to grow her as an individual whilst still keeping her in many ways the same headstrong, fighting and brave young woman we first met in Frostfire. Hocking has put Bryn through a lot over the course of this series and while she doesn’t so much as thrive she certainly manages to hold her own. Honestly, Bryn is seriously kick-ass and I love that she’s capable, independent and has plenty of personality. Bryn is the kind of heroine you can easily get behind in these kinds of fantasy novels!

I’ve enjoyed getting to know many of the other characters in the series and am going to miss them. Bryn for obvious reasons, but also Ridley, Konstantin, Ember, Tilda, Linus, Bryn’s parents, Queen Linnea and others…..They’ve been wonderful to follow and I’ve enjoyed seeing their different dynamics and interactions within the story. Konstantin himself actually became one of my favourites despite his rocky history and I was glad to see him redeem himself somewhat in Crystal Kingdom.

There’s so much going on within Crystal Kingdom. I loved stepping out of the Kanin world and exploring some of the other tribes. The Omte and Skojare were very interesting and I would love to read more about Queen Linnea and King Mikko of the Skojare if that was ever possible in the future!

Richly described, set and paced, Crystal Kingdom was a worthy conclusion to what has been a wonderful series. Amanda Hocking brings to all to a thrilling close that sees the story end, not without consequences and loss, but also with endless hope…..

Source: Sent for review by Pan Macmillan Australia (Thank you Alana!)
Format: Paperback
Buy it: Bookworld | The Nile | The Book Depository | Amazon
My Recommendation: If you enjoy fantasy and faerie tales, this series is for you!
Cover: I think it's very pretty, although it's not my favorite of the trilogy....
Will I read sequel/continue with series: This is the final book obviously, but I would love to read more of the Kanin/Tryle world if ever possible!