Book Shelf: Off the Page (Between the Lines #2) by Jodi Picoult & Samantha van Leer 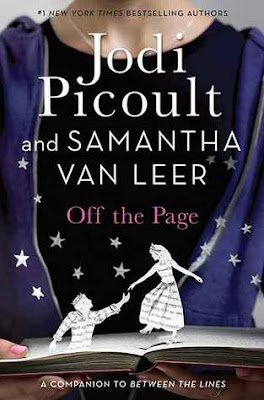 From #1 New York Times bestselling authors Jodi Picoult and her daughter and co-writer, Samantha van Leer, comes OFF THE PAGE, a tender and appealing romantic YA novel filled with humor, adventure, and magical relationships.

Sixteen-year-old Delilah is finally united with Oliver—a prince literally taken from the pages of a fairy tale. There are, however, complications now that Oliver has been able to enter the real world. To exist in Delilah’s world, Oliver must take the place of a regular boy. Enter Edgar, who agrees to take Oliver’s role in Delilah’s favorite book. In this multilayered universe, the line between what is on the page and what is possible is blurred, but all must be resolved for the characters to live happily ever after. Includes twelve full-color illustrations, and black-and-white decorations throughout.

Full of humor and witty commentary about life, OFF THE PAGE is a stand-alone novel as well as a companion to the authors’ bestseller Between the Lines, and is perfect for readers looking for a fairytale ending. Fans of Sarah Dessen and Meg Cabot are sure to appreciate this novel about love, romance, and relationships.

Mother and daughter writing duo Jodi Picoult and Samantha van Leer are back with another whimsical adventure sure to easily sweep you into its magical story. If you’ve ever wondered what happens when the famous words, “And they lived happily ever after," are uttered, then Off the Page is the perfect novel for you!

After the difficulties they faced in the first novel Between the Lines, Delilah, a normal and everyday teenage girl and Oliver, the fairy-tale hero she fell in love with and then fought to release from the confines of storybook he called him are facing new challenges. Living in Delilah’s world, Oliver is now attending high school, and bonding with his “mother” and everything with Delilah is going wonderful….minus a few hiccups of course. That is, until some of the characters from Oliver’s story and the book itself start reaching out to Oliver and Delilah in an effort to right the wrongs Oliver’s absence has caused. Delilah can’t bear the thought of Oliver returning to the pages he was so happy to leave, but it soon becomes clear that neither teen may have a say in the matter….

I really quite enjoyed Between the Lines and found its sequel Off the Page to be a worthy follow up. In all honesty, I think Delilah and Oliver’s story could have been left concluded in the last book, but having now read Off the Page I am glad the authors decided to write a sequel. Off the Page details the events after Oliver’s escape from his book and makes it abundantly clear that even though Delilah and Oliver are together, their challenges are not over just yet….

The way in which Off the Page is written really appeals to me. Obviously Oliver has come from a fairy-tale so there is that aspect the authors weave into the story alongside today’s modern world. Picoult and van Leer manage to create a very fun and well written story that I honestly think will appeal to all ages. Friendship and romance blend together with wit and humour that compliments a whimsical storyline that features fire breathing dragons and mermaids and princess and pirates….and so much more. Add in the beautiful and detailed drawings that make an appearance throughout the novel on occasion and Off the Page becomes a very entertaining story.

Even though it seems like they should have been through the worst after the events of the first book, things are not smooth sailing for Delilah and Oliver in Off the Page, something that makes for highly entertaining reading. Both Delilah and Oliver are still the same delightful characters I found them to be in the first book and I really do enjoy their romance. They’re smile inducing and oh, so sweet to witness. I enjoyed seeing Oliver stumble around it Delilah’s world and learn how to be a “normal” teenager in Off the Page. It was really quite funny at times and have to commend both Picoult and Van Leer for the comedy and humour they manage to weave into the story.

I don’t want to give away too many spoilers, but obviously the aim for Delilah and Oliver is to find a way for Oliver to stay in the real world permanently—something our young lovers thought they had discovered, but soon realize isn’t the case. Picoult and van Leer certainly make Delilah and Oliver work for their relationship but I really appreciate this fact. It gives them more foundation.

Overall, Off the Page is a lovely follow up to Between the Lines that expands on main characters Delilah and Oliver’s story and with Oliver’s “double” Edgar front and center in this book too, I have to say Off the Page is definitely worth a read!

Source: Sent for review by Allen & Unwin (Thanks guys!)
Format: Paperback
Buy it: Bookworld | The Nile | The Book Depository | Amazon
My Recommendation: Fans of magic and Picoult will not want to miss this one.
Cover: I'm not the biggest fan. I think it has potential but just doesn't do anything for me.......
Will I read sequel/continue with series: I would love to see more of Delilah and Oliver but I think their story is well and truly told.