Book Shelf: Take Me On (Pushing the Limits #4) by Katie McGarry 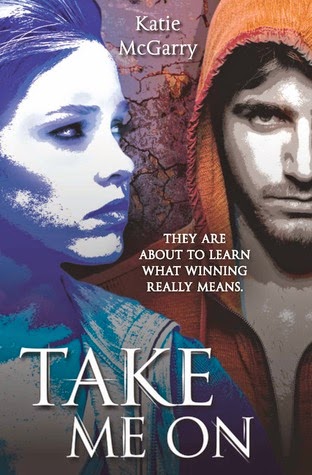 Champion kickboxer Haley swore she'd never set foot in the ring again after one tragic night. But then the guy she can't stop thinking about accepts a mixed martial arts fight in her honor. Suddenly, Haley has to train West Young. All attitude, West is everything Haley promised herself she'd stay away from. Yet he won't last five seconds in the ring without her help.

West is keeping a big secret from Haley. About who he really is. But helping her-fighting for her-is a shot at redemption. Especially since it's his fault his family is falling apart. He can't change the past, but maybe he can change Haley's future.

Hayley and West have agreed to keep their relationship strictly in the ring. But as an unexpected bond forms between them and attraction mocks their best intentions, they'll face their darkest fears and discover love is worth fighting for.

Take Me on is the fourth installment in Katie McGarry’s tremendously written and deeply satisfying Pushing the Limits series and is without a doubt another killer story by one of the prime contemporary authors of this genre—McGarry will make you smile, laugh and cry.....then beg for more!

I can say in all honesty that Katie McGarry is one of the reasons I enjoy contemporary fiction as I do. Prior to reading her debut novel, Pushing the Limits, the contemporary genre wasn’t something I read a lot of, but thanks to the delicious characters and incredible romantic connections McGarry and those like her write, I’m very much falling in love with these kinds of stories. And Take Me On only helps cement my love of contemporary novels!

Though not the best book in the series in my opinion—Crash Into You holds that reign for me---Take Me on was still an absolutely sensational read! Following West Young, the older brother of Crash Into You protagonist Rachel and introducing us to Hayley Williams, a young fighter dealing with a lot of difficulties, Take Me On is an exhilarating story of love, friendship and finding the strength to fight for what you really want!

Expertly written, Take Me On is told in the dual POV’s of West and Hayley; something that only enhances the reading experience as far as I'm concerned. Varying chapters told by each character allows you as the reader to really see into the hearts and minds of West and Hayley; we learn what makes them tick, and see their struggles--something that truly helps you understand the journey they're on.

West and Hayley were really great characters to follow in this book. I always enjoy meeting a new couple written by Katie McGarry and have to applaud her for always managing to give them originality and yet making them real and relatable. It's impossible not to love her characters; from the feature two in each book to the other minor characters we meet along the way and yet whom I'm really hoping to hear stories about--characters that include Abby, Ethan, Logan, Jax and more.

Having briefly met West in the previous book, I was very excited for the chance to follow him in Take Me On, but found I was pleasantly surprised to see how different he was than what I was expecting when heading into the book. West is a very conflicting character. He's a rich boy and has had nothing but opportunity after opportunity. He's never gone for anything in his life, but he's also never felt like he belonged. Acting out and getting into fights have been a normality's in West's life for a long time, a result of his struggling relationship with his father and his inability to really connect with his family; bar his sister Rachel and brother Ethan.

West harbors a lot of guilt over what happened to his sister at the end of Crash into You and honestly believes it was his fault. This is something he carries around and it's not until he meets Hayley does he begin to let something good into his life. West comes a long way over the course of this book. I won't go into too many details, but some harsh decisions by his father force West to be on his own and he slowly learns what he has to do to survive and be a man. McGarry knocks West and the entire Young family around the ring with some surprising revelations that change everything West thought he knew about himself! Personally, I adored seeing West grow in this book and think McGarry did a great job giving West the tools to grow and allow him to find his feet!

Hayley is a delightful match for West in Take Me On. A fighter by nature, the destruction of her family's life has left Hayley a shadow of who she used to be. Shouldering so much on her own Hayley doesn't really let people in and in so many ways has given up on her hopes and dreams and all that she loves. Hayley really just struggles day by day. And she doesn't even know she's let herself get so low until West walks into her life and makes her feel something real. Hayley is a really great character. She's smart and quick thinking and keeps West on his toes, but she's also gone through a lot. And it shows. Take Me On really highlights Hayley's journey to being in a good place after so much difficulty and I enjoyed seeing Hayley take back some control of her life.

Despite their social differences Hayley and West really become the others strength in Take Me On. Both are in hard places with their own issues, and it's something that bonds them. Raging attraction aside, McGarry gives their relationship a lovely foundation of comradeship that sees them only help strengthen and assist the other. West and Hayley have a great dynamic; they're both attracted to the only and have great chemistry, so seeing the electric part of their relationship blend with the deeper side was beautiful.

Choc-full of exhilarating romance and shocking family revelations, Katie McGarry explores her standardly flawed and struggling, but incredibly beautiful characters amongst stunning romance and addicting chemistry in Take Me On--trust me this is one series that will leave you begging for more with each and every book!

Source: Sent for review by HarlequinTEEN Australia (Thank you Polina!)
Format: Paperback
Buy it: Bookworld | The Nile | The Book Depository | Amazon
My Recommendation: This series is a MUST READ!
Cover: It goes perfectly with the rest in the series!
Will I read sequel/continue with series: Ahhh, yes. Yes, yes, YES!!!