Book Shelf: Forever Too Far (Too Far #3) by Abbi Glines 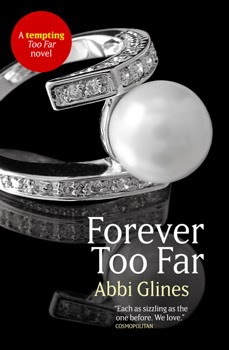 Rush promised her forever... but promises can be broken.

Torn between his love for his family and his love for Blaire, Rush has to find a way to save one without losing the other. In the end one has to be more important. Letting go isn’t easy.

Blaire believed in her fairytale... but no one can live in a fantasy.

Her love for Rush and desire to have a family keep her believing that they can find a way for this to work. Until she has to make the right decision for her and the baby. Even if it breaks her heart.

Can they find the forever that they both want or has it all just gone... too far?

Forever Too Far is the emotional, and at times dramatic, conclusion to Abbi Gline's Too Far series and tells the final installment in Blaire and Rush's journey in what is an intense and adorable read!

After taking my time to actually begin this series, it's suffice to say I've enjoyed each and every book---breezing through the entire series in a week. Which, when you work full time, is really something. From the opening chapter in the very first book, this series has been addictive. The simple dynamic of the plotline was lovely to read about and the crazy, intense, lovable and at times maddening characters have made the Too Far series one swift excitement after another. Basically it's been a story and world I've loved getting lost in.

So, in that being said, Forever Too Far is a perfect example of everything good about this series. After the adorable ending of Never Too Far, Blaire and Rush begin this chapter of their story preparing for the arrival of their first child, planning their wedding and looking forward to their future, but in typical Abbi Glines fashion, Glines throws one hurdle after another at this young couple and together Blaire and Rush must face things once and for all; proving the strength and durability of their relationship.

Forever Too Far is sweet, sassy and so much fun. I'll be honest, I've had my issues with Blaire and Rush throughout this series, but with each and every book I've fallen in love with them a little bit more, warming to them just that bit extra. So much so that I was giddy the entire time I was reading this book. After everything Abbi Glines has brilliantly put them through; all the difficulties, all the drama, seeing them become man and wife and then welcome their son into the world was so satisfying to behold.

If you're heading into this book believing pregnancy is going to put a damper on Blaire and Rush's love life, you'd be wrong. Their relationship is as strong, and sexy, as ever with Glines saucy, and at times naughty, writing detailing their sensual and sweet romance.

While Blaire and Rush may have found their happily ever after there are a number of other loveable and beguiling characters Glines has introduced throughout the series that have not. Characters whose own powerful personalities deserve stories and with Woods and Della's tale well underway in their spin-off series, I'm hopeful for Grant and Harlow's tale in the future, as well as a few others I hope Glines gives some love to one day.

A sexy, fun and adorable ending to the Too Far series, Forever Too Far hits the nail on the head with it's engaging and satisfying storyline. The conclusion Abbi Glines delivers is everything that I could have asked for and more, and though I'm sad to see the series come to an end, a better ending there couldn't have been!

Source: Sent for review by Simon & Schuster (Thanks so much guys!)
Format: Paperback
Buy it: Bookworld | The Nile | The Book Depository | Amazon
My Recommendation: A NA must read!
Cover: Perfect with the rest of the series!
Will I read sequel/continue with series: Let's put it this way--whatever Abbi Glines writes I will read!