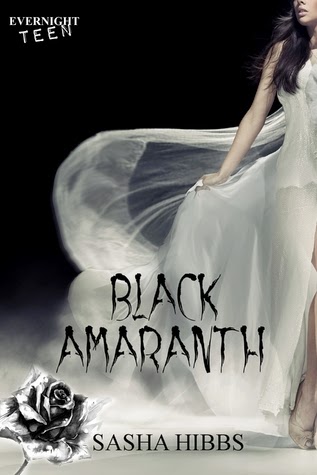 Eighteen-year-old Ally Watson arrives home from high school graduation, more than a little annoyed that her Uncle Argyle—Ally’s legal guardian and only surviving relative—didn’t even bother showing up. But instead of berating him for his forgetfulness, Ally finds him in a life-or-death battle with a monster. Argyle manages to kill the creature, and gives Ally a parcel containing a destiny she never knew existed.

Ally, along with her best friends Michael, Jessica, and David, hurry to Georgia to uncover the truth of Uncle Argyle’s secrets, and the meaning of the mysterious marks that Ally bears. Are the marks related to the blacksmith mythology of her ancestors? Who are these heavenly warriors who show up in the oddest of places? And will an ancient gypsy curse destroy the very things Ally fights to save?

Black Amaranth: a simple flower, a symbol with an ancient legacy, a conduit for prophecy…while faith and hope are essential to the journey, Ally soon discovers that love is the most powerful force of all.

Black Amaranth is the first book in the Vulcan Legacies series by Sasha Hibb and weaves together danger, darkness and the power of love and friendship in this unique twist on the traditional angelic tale.

I have to say, Black Amaranth was a real roller-coaster of information and mythology for me. Author Sasha Hibb’s impressed me with her different take on vampires, angels and werewolves in this book. I honestly feel like Hibb’s has made a very real attempt to take something we’ve all seen so many times and shake them up. And she does a decent job in doing so.

In Black Amaranth we are presented with a number of different beings: Seraphs; angels, Blaxxmiths; the result of Seraph’s breeding with mortals, Nosferatu: vampires, and werewolves. We also have gypsies making an appearance too. Weaving them all together, Hibb’s introduces us to Ally, a seventeen year old teenage girl who shockingly learns she is actually a Seraph, an angelic being, and more importantly is one that was long ago prophesized to either save the world or destroy it.

Hibbs also goes to great length to detail the history of the beings within her world, and while I appreciate this, it also left me very, very confused at times. So much sits on our heroine’s shoulders and as we learn just who, and what, she is, the way in which Hibbs explains her heritage and role within the prophecy had me very confused at times. I think its brilliant how everything is interconnected, and Hibb’s reveals things exactly when she should for maximum effect, but even as the first few chapters of the story ended, there are still a few parts where I don’t think I completely comprehended what is going on.

That being said, I did enjoy the story. Ally is a decent main character and the story progresses nicely. It felt a bit rushed in the beginning and towards the end, but Sasha Hibb’s managed to hold my attention regardless. I like the supernatural elements mixed together with the strong themes of love and friendship in the book. Ally has some true friendships and I loved the romantic elements Hibb’s has added in. Personally I didn’t quite feel the connection between Ally and her love interest Michael, but her best friend Jessica’s love/hate relationship with warrior Eli, as well as the connection shared by their siblings Dave and Lucy has me all excited to see where they would go.

Overall Black Amaranth is a worthy read. Hibb’s mixes all the elements for a good supernatural read together with some unique lore. Plenty of shocks and twists will keep you on your toes, as well as the discovery that no one is as they seem. Black Amaranth ends on a cliffhanger that shakes everything up that has me eager to read the next book!

Source: Sent for review by the author (Thank you Sasha!)
Format: Kindle ebook
Buy it: Amazon (Kindle) | Amazon (Paperback) | The Book Depository | Barnes & Noble | Kobo | Smashwords
My Recommendation: If you love unique fantasy and angel lore, this will be perfect for you.
Cover: I think it's absolutely beautiful; breathtaking!
Will I read sequel/continue with series: Yes