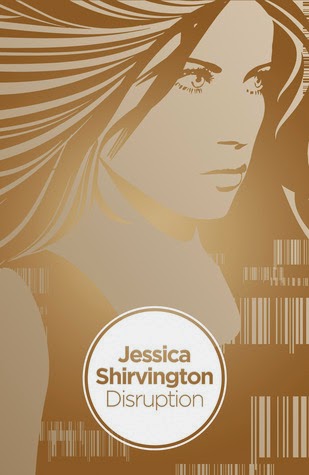 What if a microchip could identify your perfect match?
What if it could be used against you and the ones you love?

Eight years ago, Mercer Corporation’s M-Bands became mandatory. An evolution of the smartphone, the bracelets promised an easier life. Instead, they have come to control it.

Two years ago, Maggie Stevens watched helplessly as one of the people she loves most was taken from her, shattering her world as she knew it.

Now, Maggie is ready. And Quentin Mercer – heir to the M-Corp empire – has become key to Maggie’s plan. But as the pieces of her dangerous design fall into place, could Quentin’s involvement destroy everything she’s fought for?

In a world full of broken promises, the ones Maggie must keep could be the most heartbreaking.

Jessica Shirvington's latest release Disruption is a phenomenal tale of corrupted leaders and shocking secrets; exploring the destruction that relying on technology can bring in this science fiction thriller that weaves high stakes danger and riveting suspense with passionate love and unexpected friendship!

I have to say.....Disruption is a sensational read! Honestly. I almost have no words to adequately describe how much I loved this book. This may be the first Jessica Shirvington novel I've read to date, but her sensational writing and suburb character development so early on had me sucked in and incredibly addicted to this story! Disruption was perfectly paced and detailed, with plenty of shocking twists and turns that I didn't see coming. Jessica Shirvinton pens a brilliant heroine that made reading this story a brilliant experience and I was extremely impressed with the originality of Disruption and it's engaging storyline.

Following eighteen year old Maggie Stevens, Shirvington details a riveting society within Disruption where every individual is fitted with an M-band; an electronic wristband that monitors everything from time to heart rate, and allows people to access money as well as communicate. In a world so reliant on this one piece of technology, their most important use is to determine everyone's "match". In Disruption, we learn that when an individual reaches the age of eighteen, their M-band is upgraded to include Phera-tech; technology that allows the wearer to "rate" with those they come into contact with using pheromones produced in order to determine whether they are compatible or not. Those that rate high--70% or over, are deemed to be good matches, while those who rate lower are not. This is how people determine who they have relationships with, all the while hoping they will come across their "true match", the one person in the world with whom they rate 100% and are meant to be with. Though not everyone ever finds their true match, instead choosing to be content with someone they rate highly with, everyone hopes to find the one person they're meant to be with.

I was so very impressed with Jessica Shirvinton's concept within this story. It's so brilliantly explored, and very original. It was fresh and explosive and I thought she did an endlessly brilliant job exploring the corruption and devastating relying on technology had on the free will of those within Disruption. In this world where everyone relies so much on their M-band, there is a darker side to this society, a fact Shirvinton deliciously explores. With M-bands monitored by the government and the company that created them, the Mercer Corporation, there are cases where individuals rate negative with at three people in a month long period. These individuals known as negs are seem to be a drain on society and are severely dealt with, taken away into rehabilitation camps"

Featuring a fresh and creative concept, Disruption wouldn't have been as half as good as it was without an amazing main character to compliment the storyline and we certainly found that in Maggie. I adored Maggie from the moment I met her in this book and fell in love with her even more with the turn of every page.She's such a strong character and her voice so easy to follow. I found Maggie to stubborn and daring and incredibly brave. Smart, but calculating, Maggie is in no way perfect and she knows it. Willing to do whatever it takes to save those she loves, Maggie can be selfish and brash, but as you come to learn her story, you can't help but respect her. The thing I loved most about the character Jessica Shirvington has written in Maggie is that even though she's tough as nails, the act and tough exterior she puts on really is just that, an act. Maggie is haunted by her choices and though she makes them, struggles more and more throughout the course of the book.

Personally effected by the darker sides of the society she lives in, Maggie is on a mission. A mission to save someone who was taken from her and she's not about to let anything get in her way. That is until the key to her years long plan manages to worm his way under her skin and slowly into her heart......In order to rescue the person she loves, Maggie must rely on Quentin Mercer, heir to the M-Corp empire, and unwitting pawn in Maggie's schemes. What starts out as a way to extract Intel soon turns into something unexpected and deeper, as Maggie and Quentin form a grudging alliance, that sees Maggie open Quentin's eyes to the dark underground and true going ons of his family's company.

As Maggie expertly manipulates Quentin, the relationship that develops between the two is sensational to read about. Sweet, but passionate, their relationship is a slow simmering flame that burns brighter and brighter as they slowly test one another and come to rely on the other in a way neither expected. As different as they are, Maggie and Quentin compliment each other perfectly and as they work toward different goals, the chemistry that sizzles makes for some exciting dialogue and believable romance.

Excellent world building and pace make Disruption an addictive and beguiling read. You'll find Disruption hard to put down and Jessica Shirvington skillfully builds on every moment in this layered and surprising story to leave you breathlessly wanting more. Starring a kick-ass heroine and an electrifying storyline, Disruption shapes up to be one of the must-reads of the year and is a brilliant start to what promises to be a sensational new series from Shirvington! Mark this on your to-be-read lists, ladies and gentlemen--you won't regret it!

Source: Sent for review by Harper Collins Australia (Thanks you guys!)
Format: Paperback
Buy it: Bookworld | Booktopia | Amazon
My Recommendation: This book is one of the MUST READS of the year!
Cover: Stunning! The gold shine to it is beyond beautiful.
Will I read sequel/continue with series: Yes! Yes! Yes! YEEEESSSS!