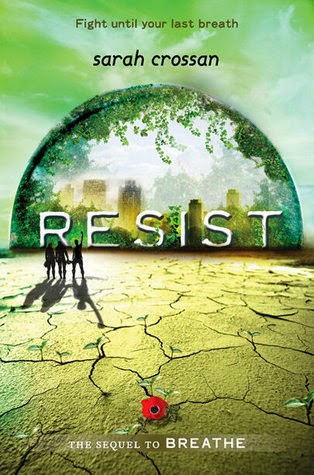 The sequel—and conclusion—to Sarah Crossan's Breathe. Three teen outlaws must survive on their own in a world without air, exiled outside the glass dome that protects what's left of human civilization. Gripping action, provocative ideas, and shocking revelations in a dystopian novel that fans of Patrick Ness and Veronica Roth will devour.

Bea, Alina, and Quinn are on the run. They started a rebellion and were thrown out of the pod, the only place where there's enough oxygen to breathe. Bea has lost her family. Alina has lost her home. And Quinn has lost his privileged life. Can they survive in the perilous Outlands? Can they finish the revolution they began? Especially when a young operative from the pod's Special Forces is sent after them. Their only chance is to stand together, even when terrible circumstances force them apart. When the future of human society is in danger, these four teens must decide where their allegiances lie. Sarah Crossan has created a dangerous, and shattered society in this wrenching, thought-provoking, and unforgettable post-apocalyptic novel.

Resist is both the sequel and the conclusion to Sarah Crossan’s thrilling and at times shocking, Breathe duology and is an electrifying end to this dystopian read that will leave you breathless!

I must admit it’s taken me a little while to actually read this series, and now having finished it, I can’t for the life of my figure out why it took me so long! Breathe has been a thoroughly enjoyable series to read. With only two installments in the series, it’s gone fast, but both books have been well written, well thought out and deeply intriguing. I can’t think of a moment where the characters, the story and the pace haven’t been to my liking and not enough to keep me entertained.

Resist picks up exactly where Breathe left off, with The Grove destroyed by Ministry forces and Quinn and Bea on the run for their lives in the pod. The Resistance has been almost eradicated and those who’ve survived have been displaced, with nowhere to go. Resist sees Alina, Silas, Maude, Bruce and other Resistance members heading off in search of sanctuary from another group of rebels, discovering along the way that not everyone supports their way of thinking and may have even more dangerous plans in motion for those who live in the pod.

In the meantime, Bea and Quinn are attempting to find them and instead find others from the pod who surprisingly share their feelings on the assisting the remaining Resistance members. New friends and surprising allies arise, with the mayor's son Ronan taking on a leading role in Resist, and Quinn’s dad making different decisions from the previous book.

Now told through the POV’s of Alina, Bea, Quinn AND Ronan, Resist is very fast paced. This whole book is about our characters fight for survival and a better life, and sees the characters struggle to survive not only from the elements (i.e lack of oxygen) but those who want to shut down everything they’ve worked for (the Ministry). There were tonnes of twists and turns to keep me entertained and some startling shocks including the unexpected loss of one of our main characters at the very end of the book that blew me away. I don’t want to give away spoilers, but it’s a massive loss.

The inclusion of Ronan was interesting to the character dynamic and was a great addition to the story. I worried about a potential love triangle between him, Bea and Quinn, but Crossan handles this all well. Bea, Quinn and Alina are all the fantastic characters they were from the first book, even if the stakes are dire and see them do things they wouldn’t otherwise do. Minor characters, such as Maude Blue add that special something to the book to give it life, and just manage to make me smile time and time again.

Huge stakes and surprising developments keep Resist moving forward. The ending is explosive and hopeful, if not bittersweet, and leaves me feeling mostly satisfied, even if I wasn’t ready for the series to end. Featuring a fast paced storyline and likable characters, Breathe is a series you’ll not want to miss!

Source: Sent for review by Bloomsbury Australia (Thank you Sonia!)
Format: Paperback
Buy it: Bookworld | The Nile | The Book Depository | Amazon
My Recommendation: A wonderful blend of sci-fi and dystopian, this series is absolutely worth a read!
Cover: Goes perfectly with the cover of the first book!
Will I read sequel/continue with series: This is the last book in this series, but I look forward to reading more written by Sarah Crossan