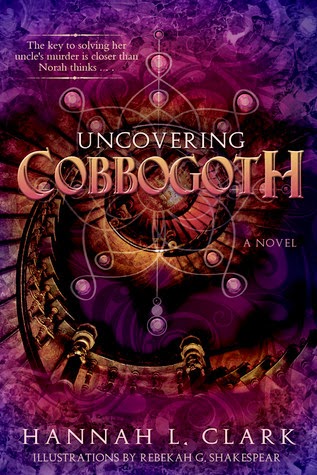 Norah Lukens needs to uncover the truth about the fabled lost city of Cobbogoth. After her archaeologist uncle’s murder, Norah is asked to translate his old research journal for evidence and discovers that his murder was a cover-up for something far more sinister.

When she turns to neighbor and only friend James Riley for help, she realizes that not only is their bitter-sweet past haunting her every step, but James is keeping dangerous secrets. Can Norah discover what they are before its too late to share her own.

Swimming with unique and different mythology and ripe with romance, Uncovering Cobbogoth will be perfect for those who love a good adventure!

In all honesty, Uncovering Cobbogoth was a bit of a mixed bucket for me. Heading into the story the archaeological aspect really appealed to me as did the sense of adventure the description promised. Unfortunately I don’t think Uncovering Cobbogoth completely lived up to my expectations. It was a good read, it was. Something was just missing for me; that special extra something that takes a good storyline and decent characters and makes it so much more.

I was impressed with author Hannah L. Clark’s ability to think outside the square in Uncovering Cobbogoth. It was very obvious she had a strong desire to create something unique and different, something she marginally does well, but there were times when this story fell flat for me. That being said, there were times where this book really shone. Clark’s writing was beautifully detailed, especially her careful descriptions of Cobbogoth, the magical and ancient world our heroine finds herself discovering throughout the story and the lush mythology she uses to support the storyline.

Told through the eyes of Norah Lukens, Uncovering Cobbogoth sees Norah delve into the magical and ancient world of the Cobbogothians. After the shocking and brutal murder of her uncle Jack, her only family, Norah finds herself piecing together the clues of her uncle’s past whilst learning the secrets of Cobbogoth; her uncle’s lifelong obsession.

Norah was a likable heroine; basic but easy to follow. She was brave where need be, asked questions, queried things and fought when she had to. I liked her, I did, but I felt like she was missing that extra something to take her from being a good heroine to one that knocks you off your feet. Still. She got the job done.

Norah has plenty of secrets to uncover in this story and I liked how Hannah L. Clark kept me on my toes as we uncovered things. I enjoyed being able to piece things together as Norah did and figure out who was friend and who was foe. I admit, with the complicated lore I was confused a couple of times as everything was difficult to wrap my head around at times. The motivations of some characters and their true natures were intriguing to uncover and I liked that Clark managed to surprise me when certain loyalties were revealed.

There’s a sweet underlining tone of romance between Norah and her best friend James that compliments the story. Norah and James are good friends have a sweet romance, something Clark builds on and gives importance within the story.

Featuring a fast paced storyline that kept me marginally entertained, Uncovering Cobbogoth is rife with secrets and action. I may be persuaded to pick up the second book!

Source: Sent for review by YA Bound Book Tours and the author (Thank you Nereyda and Hannah!)
Format: Ebook
Buy it: Amazon | Barnes & Noble | The Book Depository
My Recommendation: Adventure fans will most likely enjoy this.
Cover: Pretty and quite fitting for the story.
Will I read sequel/continue with series: Possibly, yes :)