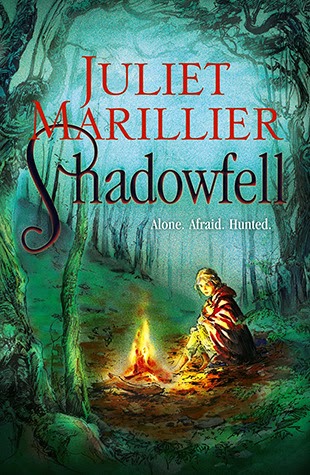 The people of Alban are afraid.

The tyrannical king and his masked Enforcers are scouring the land, burning villages and enslaving the canny.

Fifteen-year-old Neryn has fled her home in the wake of its destruction, and is alone and penniless, hiding her extraordinary magical power. She can rely on no one – not even the elusive Good Folk who challenge and bewilder her with their words.

When an enigmatic stranger saves her life, Neryn and the young man called Flint begin an uneasy journey together. She wants to trust Flint but how can she tell who is true in this land of evil?

For Neryn has heard whisper of a mysterious place far away: a place where rebels are amassing to free the land and end the King's reign.

A story of courage, hope, danger and love from one of the most compelling fantasy storytellers.

Shadowfell by Juliet Marillier is a deeply written fantasy tale full of courage, hope and unparalleled magic that will sweep readers into a dangerous story where love and loyalty are tested and betrayal is just around the corner.

In the fantasy genre, Juliet Marillier is a well known name. A talented author of many books, it may come as a surprise to hear that this is actually the first book of hers I've ever read. Although I doubt it will be the last. Superbly written and with traditional fantasy elements interwoven with unique myth, Shadowfell proves to be quite the interesting story.

Shadowfell introduces us to Neryn, a young woman with the unique ability to see what others cannot--the Good Folk, magical begins that inhabit the land of Alban she calls home. In a time where a tyrant king rules with an iron fist; the people cower behind his rule and bloodshed litter the villages, towns and forests that span Alban.

Neryn's canny gift marks her as special, and hunted; forcing her to flea and hide to protect both herself, and others from her canny gift. During her journey to Shadowfell, a rumored land with rebel forces, Neryn meets many individuals, some human, some Good Folk. Some are friend, others are foe and at times both help and hinder her on her quest. As Neryn struggles to understand truth from lies, she must learn to trust those around her and rely on herself like never before, finding companionship in the form of Flint, a mysterious young man who saves her during one of her darkest moment, but who is more than he seems and whose ties to the royal court may be of a nefarious nature and that of Sage, Sorrel and Red Cap, Good Folk who aid Neryn in the beginning of her journey.

Neryn's tale is a hard one, and at times quite sad. Marillier writes Neryn as a kind, innocent young woman, and details the hard journey she finds herself on, alone and often unsure of who she can trust perfectly. Marillier doesn't shy away from the harsh journey Neryn is on and forces her into difficult situation after situation, forcing her to rely on herself and at times others. Neryn is a kind soul; giving and sharing of what little she has, and though she is young at times naive, Marillier writes it impossible not to like her. As she begins to grow, her voice becomes more and more riveting to follow.

Though this story is masterfully written and detailed, admittedly there were times when the book seemed to lag and I found my mind wandering. That being said, I understood the purpose for certain extended explanation and description to set the setting and explain certain aspects of the story. These slower moments of the book often led to a dangerous fight sequence or important discussion between Neryn and Flint, so in this instance I will forgive Marillier for this.

Encompassing many delightful fantasy elements and a young, but strong main character, Shadowfell does a good job of introducing this new series by Juliet Marillier. As this chapter of Neryn's story comes to an end, I find myself looking forward to the next one and seeing what developments Marillier has in store next!

Source: Sent for review by Pan Macmillian Australia (Thank you Eve!)
Format: Paperback
Buy it: Bookworld | The Nile | The Book Depository | Amazon
My Recommendation: Fantasy fans will like this.
Cover: I'm not the biggest fan of it. Doesn't do anything for me unfortunately.
Will I read sequel/continue with series: Yes.