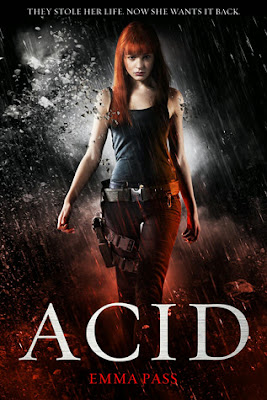 The year is 2113. In Jenna Strong's world, ACID—the most brutal controlling police force in history—rule supreme. No throwaway comment or whispered dissent goes unnoticed—or unpunished. And it was ACID agents who locked Jenna away for life, for a horrendous crime she struggles to remember. But Jenna's violent prison time has taught her how to survive by any means necessary.

When a mysterious rebel group breaks her out, she must use her strength, speed, and skill to stay one step ahead of ACID, and try to uncover the truth about what really happened on that terrible night two years ago. They have taken her life, her freedom, and her true memories away from her. How can she reclaim anything when she doesn't know who to trust?

Emma Pass’s debut novel Acid is a richly action based novel that will take readers on an intricate ride from its opening chapter!

Launching into Acid, I was really unsure what to expect. The fierce cover had my attention and if that wasn’t enough, the tagline sure had me all fired up for a blazing story. Unfortunately, Acid wasn’t quite the addictive read that I hoped it would be, but still proved to be entertaining on a number of different levels and managed to keep me reading on. There’s was nothing wrong with this book, far from it, but for some unknown reason, Acid failed to captivate me as I hoped.

Detailing a futuristic London where a military based company named ACID controls the country, Acid features heroine Janna Strong, a fierce young woman imprisoned for killing her parents. Emma Pass does a good job with her intricate and action based storyline; managing to mix non-shop action with secrets, lies and the mystery surrounding the workings of ACID and the truth behind Jenna’s past.

I have to say, I was really impressed with Jenna as a heroine. Not only is she extremely kick-ass; brave, fierce and capable, she’s also genuinely likable and displays moments of vulnerability throughout Acid. Jenna was basically a normal girl within the world of Acid, but who had to toughen up and learn to protect herself when she was sent to prison for killing her parents. As a result of this, Jenna is self-proficient and bodily able, and this really helps her during the story as she finds herself on the run and unsure who to trust.

During the course of the book, Jenna manages to uncover some startling truths about not only herself but the governing body that runs her country. In a world where mind altering is possible and facial changes are an everyday thing, no one is as they seem and scenarios and situations may not always be as they appear.

Overall Acid was a solid read. As Jenna races to find out just what ACID is up to, making friends, finding love and discovering the truth behind her parents deaths along the way, readers are sure to enjoy Emma Pass’s debut novel!

Source: Sent for review by Random House Australia (Thank you Dorothy!)
Format: Paperback
Buy it: Bookworld | The Nile | The Book Depository | Amazon
My Recommendation: If you enjoy action and dystopian reads, then this is for you.
Cover: I seriously adore this cover! It's kick-ass!
Will I read sequel/continue with series: As far as I'm aware this is a stand alone novel, but I wouldn't pass up the opportunity to read more by this author in this future.....