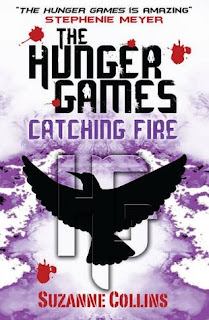 Against all odds, Katniss has won the Hunger Games. She and fellow District 12 tribute Peeta Mellark are miraculously still alive. Katniss should be relieved, happy even. After all, she has returned to her family and longtime friend, Gale. Yet nothing is the way Katniss wishes it to be. Gale holds her at an icy distance. Peeta has turned his back on her completely. And there are whispers of a rebellion against the Capitol - a rebellion that Katniss and Peeta may have helped create.

Much to her shock, Katniss has fueled an unrest she's afraid she cannot stop. And what scares her even more is that she's not entirely convinced she should try. As time draws near for Katniss and Peeta to visit the districts on the Capitol's cruel Victory Tour, the stakes are higher than ever. If they can't prove, without a shadow of a doubt, that they are lost in their love for each other, the consequences will be horrifying.

In Catching Fire, the second novel of the Hunger Games trilogy, Suzanne Collins continues the story of Katniss Everdeen, testing her more than ever before... and surprising readers at every turn.

Catching Fire, is a stunning, suspenseful follow up to Suzanne Collin’s The Hunger Games!

After the lengthy time it took me to begin this series I’ve discovered that I like it very much. More so than I expected and Catching Fire proves to be a stellar sequel in Collin’s fantastic series! As usual with this series, the plotline is intense and heart-racing; filled with twists and turns I’m sure you won’t see coming. The characters are faced with hard truths and difficult choices and are constantly put through the wringer. You have to feel for them and with a massive announcement that sees Katniss and Peeta head back into the Games, there’s never a dull moment. Collins knows how to shock her readers. With her futuristic world vivid and dangerous, Suzanne Collins manages to constantly surprise me with her story direction and quick twists that sees things change drastically.

When starting this book it’s easy to tell straight a way that things have changed a lot since the end of The Hunger Games. Picking up months after the events of the first book, the wins of both Katniss and Peeta have had a drastic impact on the world of Panem. I admit I was surprised to see Collins begin the book here. For some reason I expected it to pick up right when the last left off, but I feel that by writing it in this manner we can see exactly how much things have changed and how big an impact the Games had on everyone. And things certainly have changed—in the biggest of ways!

Katniss is definitely not the girl she was in the first book. I left The Hunger Games adoring her and while I still do, she’s undeniably jaded and hardened as only a victor of the Games could be. Her spirit and fire still remain, as well as all the character that made her such a fantastic heroine, but she’s also plagued by memories of what happened in the games. While her family’s life has improved and their relationship better than ever, her relationship with Peeta is in shambles as well some of the other people she loves. She’s torn between who she is and who she should be and she can’t seem to figure out what to do. She still wants to protect those she loves and with a target on her back and those she loves thanks to her actions at the end of the last Games, this is now more important than ever. The Girl On Fire, is truly the spark that will change everything everyone in the Districts knows and as the novel progresses it’s wonderful seeing her accept and take on her role with the “uprising” as she does.

One of the things that make Katniss so great is that she’s so flawed. In the harsh world she lives in, her constant struggle with herself and her desire to do right by those she loves make her easy to emphasise with. She feels real. In the middle of a Games where everything is on the line, she struggles with the things she must do in order to protect Peeta and she’s plagued by the choices she has to make. She doesn’t want to betray the people she comes to rely on, but what choice does she has when it comes down to her, Peeta or them? It’s really an impossible situation where her survival instincts war with her heart. As the reader, I find it easy to imagine myself in Katniss’s place and it's a horrible thought. There really is no wrong choice. But nor is there a right one most of the time. No matter what she does someone will get hurt and it’s only as she begins to realise this does she see just how important it is to keep fighting against the Capital for something different. Something better. There’s so much growth within her, as an individual and as a leader—someone looked up to and someone relied on.

I can’t deny that I’m well aware of the Peeta/Gale debate and I know I’ll be annoying by saying this....but I just don’t see it. There is no choice in my mind. I know Katniss struggles with the feelings she has between Peeta and Gale, but to me there’s no other option. It’s Peeta; it can only be Peeta. Perhaps it’s because I don’t feel we’ve really seen enough of Gale in these first two books for there to be a love triangle, but to me it’s Peeta she belongs with. She’s spent her whole life knowing Gale. We haven’t seen it, but their history’s there. He’s that strong, powerful friend who she can be herself with and who she feels a spark with, but should she really be with him? I think not.

Peeta has been a constant throughout the series so far. He’s the one she’s been on her journey with, the one she’s relied on, fought with and defended. While their relationship has often been complicated with the authenticity of it always being an issue thanks to the lies they issued to the people of the Capital, there’s no denying that it’s real. Katniss struggles with what she feels and in her situation, who can blame her? It doesn’t seem like things will ever been okay, and with all she’s witnessed it’s understandable that she’s afraid to take that step. Peeta and Katniss are two very different people. She’s independent and self sufficient, while he’s slightly softer and gentle, but I don’t think Peeta’s weak at all. There’s courage in being able to sacrifice yourself for the one you love and for finding the strength to go on simply for another.

He may never be the strongest person out there, or the fiercest, but he’s loyal and honourable and a lot of things Katniss isn’t. Just like she’s so much he’s not. They balance each other out. They need each other in a way I don’t feel Katniss needs Gale. There’s a desperation in her when she imagines life without Peeta. Granted she feels a similar way when she thinks about life without Gale, but there’s a different drive behind that. Everything they’ve been through connects them so strongly that I think the only possible outcome is for Katniss to admit she’s in love with Peeta.

When you look at cliff-hangers and major endings, Catching Fire doesn’t disappoint! The ending of this literally has me scrambling for the next book right now. Collins managed to have me open-mouthed and shocked right to the last page. I cannot believe some of the developments of the this book—it’s outta this world!

Source: I bought.
Format: Paperback.
Recommend: Yes!
Recommend borrow or buy: Buy it.
Cover: Again, I don't like it--it just does nothing for me.
Read sequel/continue with series: YES!