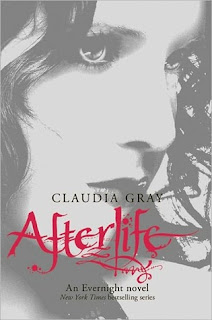 Bianca and Lucas have always believed they could endure anything to be together. When a twist of fate not only transforms Bianca into a wraith but also turns Lucas into a vampire--the very creature he spent his life hunting--they are left reeling.

Haunted by his powerful need to kill, Lucas can turn to only one place for help . . . Evernight Academy. Bianca is determined to remain with him. But with the vampire leader of Evernight waging a war against wraiths, her former home has become the most dangerous place she could be, despite the new powers her ghostly transformation has given her.

A battle between wraiths and vampires looms, and Bianca and Lucas face a terrifying new reality. They've overcome every obstacle life has thrown at them, but is their love strong enough to survive the challenges "after" life?

Afterlife marks the end of Claudia Gray’s Evernight series and it ends with a heart-pounding conclusion bound to leave you feeling satisfied.

Despite all the vampire books out there that litter the YA genre, I still find the Evernight series to be fun, exciting well written reads. Each book has been of a high standard and has continued to entertain me, even though vampires are something I’ve seen quite a bit. Gray’s plotline and her vampiric myths have been engaging and interesting and are never boring. I’m always drawn into the Evernight books and Afterlife is no exception!

It’s taken me a while to get to this book and I’m almost sorry, however I’m glad I can now dive straight into Balthazar. I easily read this book in one sitting and its gripping storyline had me eager to see how Bianca and Lucas’s journey would end. One of the things I’ve loved about this series are the characters that litter it’s pages. They have such a great dynamic together and actually have personality. With our main characters Bianca and Lucas front and centre, we’ve also had the pleasure of seeing some of the other characters including, Balthazar, Raquel, Dana, Vic, and Ranulf shine. Written perfectly to fit the story, I’ve loved seeing them throughout the series and the humour, romance and excitement they constantly have brought to the series has been a pleasure to read about. Personally, I’d continue reading just to see them!

As far are star-crossed lovers go Bianca and Lucas have been great to read about. I’ve enjoyed reading about their adventures and seeing them develops both as individuals and as a couple. Throughout the series their unwavering dedication to one another and love has been sweet and as a heavy focus during the series I always enjoyed seeing them together. There’s no doubt that they’ve both changed throughout the series, but they’re still very much the great characters they were in the first book. In Afterlife, Lucas faces his worst nightmare and it was humbling seeing him not to be quite as strong as he’s always been as he struggled with being a vampire. It made him more human and I liked seeing him in a different light. I felt sorry for him even as I enjoyed watching he and Bianca find their way in their new lives.

I thought it was really interesting how Claudia Gray developed Bianca’s character. The history between the vampires and the wraith were really intriguing from the beginning and I enjoyed seeing how this played out into Bianca’s life. As a person, Bianca was always easy to read about, a good individual with just the right amount of spirit to make her fun to read about but it was the complicated history of her existence that made her awesome to follow. I thought it was exciting and I was constantly on edge to see what would happen with Bianca and her existence.

As I’m sure you’re well aware, Gray has also written a companion novel featuring Balthazar, the saddest, loneliest and perhaps the most intriguing of all the Evernight side characters. In the beginning, when there was the hint of a love triangle, he always remained noble and true and while I still cheered on Lucas, Balthazar managed to worm his way into my heart. In Afterlife, we have our first glimpse of Skye, the new character and human girl at Evernight Academy that will be his love interest in his book. Seriously, I love Skye already. Her fire, kindness and bravery throughout her small parts of this novel have me dying to learn more about her already!

Afterlife is an exciting read. As the final novel in the series it doesn’t disappoint with all the action, humour and romance that have made this series so brilliant! Gray weaves together a complicated story with on your seat action, betrayal and excitement that will have to glued to the last page and desperate to know how it all ends!

Source: I bought.
Format: Paperback.
Recommend: Yes.
Recommend borrow or buy: Buy.
Cover: It's pretty and fits in well with the others.
Read sequel/continue with series: While this is the last in the series, I'll definitely be reading Gray's companion novel and anything else she puts out!